The Super Amazing Adventures of Me, Pig review 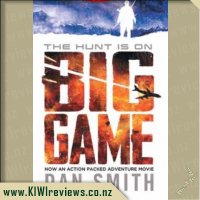 Disclosure StatementFULL DISCLOSURE: A number of units of this product have, at some time, been supplied to KIWIreviews by the company for the purposes of unbiased, independent reviews. No fee was accepted by KIWIreviews or the reviewers themselves - these are genuine, unpaid consumer reviews.
Available:
January 2015

The 'Big Game' isn't the type of book that I would normally read but that's the beauty of KIWIreviews, I go a bit outside of my comfort zone to try something new. This is set in Finland, following Oskari, a 12 year old on the night/day of his thirteenth birthday, fulfilling his people's tradition of surviving the night in the forest, but of course a lot more happens than anyone can expect. Oskari is well written and felt real, he's doing his best to make his father proud and to become a man as seen in his village. The President crashes onto the scene, literally, but stills plays second fiddle to Oskari, which is good.

I was expecting to read this and find it unbelieveable but Oskari doesn't really do anything that you wouldn't expect a thirteen year old to be able to do, and acts just as one might in that situation. I sat down to read this whilst my husband watched a horror movie for the tenth time and before I knew it the movie was over, he was snoring and I had finished the book. The cover tells me it's going to come out on film, I would be interested in seeing the film as I ended up enjoying the book more that I thought I would.

This does take off slow but once it gets into gear it doesn't slow down. A good read.

Read the Book. See the Movie. That had my interest. To release a book based on another story, that is already being turned into a movie starring Samuel L. Jackson, well the story must be good. And it is. It is a simple survival story, but the lack of complexity is what makes it enjoyable. There aren't layers upon layers of deception. It is a simple plot to follow.

I will admit the beginning of the story was rather slow. Without reading the blurbs, or description I had no idea what the story was about, or where the story was taking place, but these things are explained eventually. The traditions and names of the characters, immediately tell you that the story is taking place in a non-US area, and the exact country is determined later on in the film

The novel takes several hours to complete, but is still a quick read. It flows well, and is full of suspense and tension. It doesn't involve many characters, but instead has a lot of development of the main character, Oskari. It remains within the realm of possibility at all times, for what would a 13 year old would be able to do. I quite enjoyed it, and I will definitely be going to watch the cinemas