« Dr Christian's Guide to Dealing With the Tricky Stuff review 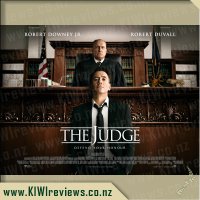 Hank Palmer (Robert Downey Jr.), a brilliant but shady attorney, returns to his Indiana hometown after learning that his mother has passed away. His arrival triggers renewed tension between himself and his father, Judge Joseph Palmer (Robert Duvall), who makes no secret of his disapproval of Hank's morally ambiguous career. As the lawyer prepares to depart, his father is arrested for a hit-and-run death. Hank takes on his father's defense, despite the objections of the resentful old man.

Reading the synopsis it sounded like so many other movies and really did not sound exciting at all. My husband and I were ready to pass on this movie until we saw who the main stars where. Out of 'fan ship' only we decided to give it a trial and I am so glad we did. The acting is so solid in this movie that it completely draws you in. Seriously I don't think we would of watched it if it wasn't for Duvall and Downey Jnr they where both captivating, so much so my husband put his tablet down and watched the whole movie.

It is definitely lacking on action but their is plenty of drama. I personally enjoyed the family dynamics and how it showed every family has its issues. It was brilliantly done. A husband and wife have three children. One goes off the rails and causes an accident which cripples a promising softball career. The judge can not forgive, son runs away and becomes a succesful lawyer only to return for the mothers funeral. A hit and run and the son now needs to represent the father.

It is drawn out a bit and includes scenes that really are unrequired. The story has its silly moments but the actors keep you focused and you are unsure what will happen next. Not everything is explained in its entirety but then again its nice to get to make up your own mind. At first Robert Downey Jnr seems extremely arrogant but after the first couple of scenes you are left feeling really sorry for him. He is great on putting on a happy face when deep down everything is going wrong for him. Loved it.

This was a nice change of a pace to what we have been watching recently. It was good to put the brakes on and realise how good life is. Also a great reminder that things are not always as they seem. A really great drama with fantastic acting. This film had a lot of work ahead of it to impress me. Casting Robert Downey Jr. as the lead is quite the gutsy move considering his recent and wildly popular appearances in the Marvel 'Iron Man' and 'Avengers' franchises. Convincing me that he could portray a character that is not Tony Stark would always be an uphill battle. But the protagonist in this film has a rather unlikeable personality. An expensive lawyer that can successfully get criminals off of charges because "the poor can't afford me", Robert Downey Jr. is playing a rather consistent style of character; rich, full of snide remarks, and still fulfilling the playboy lifestyle with the ladies.

But the film is clearly not an action-filled extravaganza. This a slow, drip-fed courtroom drama that slowly unfolds the story of this family. eventually unveiling the challenges that the family has come across and had to overcome, and the challenges that still hold them back. All of this takes front of stage while the main plot acts more of a catalyst than a main area of interest.

I personally found the film to be a little too slow for me. It took too long before I was able to start piecing some of the parts together. However, once the web began to come together, it did manage to pique my interest, and it began to draw me in. The sub-story of the romantic interest/divorce was largely inconsequential beyond a lightly humourous and awkward car ride, and lent little to the main arc of the story beyond providing a little comic-relief.

But I did enjoy the way that the film unfolded. It came together in a way that was not overly predictable, and the emotions that the characters portrayed became increasingly convincing. Watching the film with a lawyer by my side, I was aware of the laughability of the "courtroom process" but it was done in a way to provide more depth to the characters.

Quite the interesting battle between the ideologies of the characters, with every new piece of evidence changing perspectives, and changing the end goals of each character. By the end, I was rather transfixed to the screen, as it could quite as easily have gone in many different directions, with so many things at stake.

In mid-1980s Texas, electrician Ron Woodroof (Matthew McConaughey) is stunned to learn that he has AIDS.

Though told that he has just 30 days left to live, Woodroof refuses to give in to despair. He seeks out alternative therapies and smuggles unapproved drugs into the U.S. from wherever he can find them.

Woodroof joins forces with a fellow AIDS patient (Jared Leto) and begins selling the treatments to the growing number of people who can't wait for the medical establishment to save them.