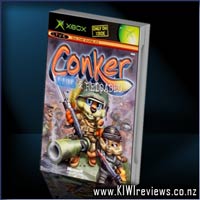 Gaming's notorious naughty squirrel is ready to stir up trouble on the Xbox and Xbox Live with all-new team-based multiplayer modes in Conker: Live and Reloaded.

Enjoy new Death Match and Campaign modes on Xbox Live or via System Link. Compete as one of six combat specialists across multi-mission campaigns. The warfare explodes with all the action, humor, and innuendos that Conker fans have come to know and love.

Features
•  Team-focused, story-driven, Xbox Live gameplay: Team-based gameplay is at the heart of this shooter, pitting the noble Squirrels against the evil Tediz. Players can choose from a variety of scenario-based missions featuring two unique campaigns - Old War and Future War - with each mission featuring its own distinctly challenging gameplay mode. Campaign story lines, comprised of multiple missions played progressively, bring an innovative and fresh approach to team-based shooters and Xbox Live, supporting up to 16 players.
•  Elite squad action: Players choose from six character classes, including Skyjockey, Long Ranger, Grunt, Demolisher, Thermophile, and Sneaker, each with its own signature weapons and abilities. In Conker: Live and Reloaded, team composition has strategic and tactical advantages and implications.
•  Xbox Live gameplay: Team-based gameplay, innovative campaign story lines, and distinctive humor all make for a great experience on Xbox Live. Online players strategize, cooperate, and communicate as a team in Campaign mode, or venture out solo against buddies in Deathmatch. Players can earn war medals, rise through the ranks, secure unlockables, and download new maps.
Massive arsenal for maximum carnage: Devastating weapons include camera-guided rockets, an acid thrower, and loads of grenade types. Operate five types of vehicles including Sky Steed, Mule Bomber, R-Hog, Toad Jeep, and Tankus and various types of equipment such as anti-infantry sentries, medi-guns, and a snoop camera. Special abilities allow players to disguise themselves or feign death and sneak up on unsuspecting foes to unload a demoralizing array of attacks.
•  Twisted and irreverent world of Conker: Over-the-top humor, characters, and gameplay dominate in every way with rude wit, lewd innuendoes, and ridiculous violence. The juxtaposition of the characters, Squirrels and Tediz, and their world is at the heart of the humor. The expressions, exclamations, and special effects bring out the true Conker flavor.
•  Wildly bizarre single-player adventure: The critically acclaimed single-player game Conker's Bad Fur Day is now on Xbox, fully recreated with amazing graphics and enhanced profanity. The game is full of hilarious situations, movie pastiches, off-the-wall puzzles, and crazy characters in an offbeat world, including horny bees, voluptuous sun flowers, singing piles of poo, and even Death himself.

Well this is a game that is set in what seems to be the second world war with some serious improvements on weaponry. The game seems to be a mix between Battlefield 1942 and Unreal Tournament. The game play is fairly easy and I have to say that it is a lot of fun. The game is fast and you get a choice in the respawn point putting u as close or as far away from the action as you want.
The best is some of the characters that you get to choose from the sniper to the spy the choice is yours and you have a few objectives. The game is absolutely huge and is going to take some time to play trough the whole game. In the fashion of battlefield you are also able to drive certain vehicles in the game which makes it just a tad more challenging.
The game rated R16 and if you are a parent I would suggest that you adhere to the recommendation, the game is violent but it also has its moments of laughter and sexual innuendo.

One of the features of the game that is making well worth buying is the playing modes that the game has. Single Player Multiplayer and lets not forget xbox live.

The game is a lot of fun and I do not want to give away to much as it is going to spoil the surprises for you.

All I have to say is that the game is really good and well worth the money. It is a first person shoot-em-up and if you are nit into that sort of thing then this might not be for you.

The Game has all the usual refinements such as choosing the character, and explaining how the character works the first time you are using it. The best part of that is put the manual aside and just go for it. You'll Love it.

Blokus is a fascinating strategy game for the whole family based on very simple rules that take less than a minute to learn, yet it has the depth to challenge both experts and beginners.

Each player chooses a colour and is given a set of 21 pieces. Players take turns placing pieces on to the board, each starting from the corner of their colour.