45 1/2 Excuses for Not Doing Homework review 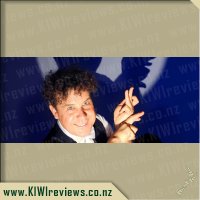 Fresh from travelling the world with a sell-out tour of 50 performances with the prestigious international production The Illusionists 2.0 -The Planets Largest Touring Magic Show, Unusualist Raymond Crowe now brings his own special magic back to New Zealand.

In February 2015 this highly sought-after entertainer returns with his own intimate, extraordinary and unconventional show. Brimming with originality and unusuality; Raymond's performances appeal to people of all ages. He'll make you laugh, cheer and gasp with his original breath-taking skills and hilarious audience participation. Raymond has charmed audiences all over the world. His amazing signature hand shadow piece performed to the Louis Armstrong classic What a Wonderful World, was a global YouTube sensation that has now been seen by an estimated 20 million people.

Originally from Adelaide, Australia; as well as being hugely popular in his own back yard, Raymond is a highly respected artiste in high demand overseas. Some of Raymond's amazing performances include the UK's Royal Variety Performance in front of the Queen, Caesars Palace in Las Vegas for NBC's The World's Greatest Magic and The Late Show with David Letterman. Leave energised, uplifted and in awe when The Unusualist appears. It's a must see show for all ages and a night that the whole family will remember for a lifetime.

I was lucky enough to win tickets to Raymond Crowe the Unusualist. What is an Unusualist you might be asking yourself well its someone who deals with the wacky, zany and just not normal.

Unfortunately there really was not a lot of advertising for his show and it got moved from the main stage to the lower stage and was under half full. Felt really bad for him because he really is amazing to watch. Both my husband and I were laughing and trying to figure out how he done some of the illusions or magic. I beleive in magic and sat with my mouth opened as he got fish from the sky and put in a bowl where they just floated on top till he put his hand in and waved it around and next minute the fish were swimming around. Where as my husband always the doubter sat there trying to work it all out.

The show is made up of various elements and all he excelled at. Intricate Hand Show Puppets, Ventriloquism, Physical Comedy, Illusionist/Magic with the vital audience participation. Raymond would use his special hands to point to audience members who he would bring on to the stage and involve them in the magic trick. The first one had me in stitches as this poor guy and girl had to go on the stage, he voiced for them which was hilarious, and they did an invisible card trick which obviously ended up in a real card being revealed. I am still left blown away.

If you get the oportunity to go, you will not regret it. I was amazed at how many children where there we had kids about the age of five sitting in front of us. The show started at 7.30 and finished just before 9.30 so really is not that late. I personally would not take my young ones but would be great for around 10 above as he gets the kids to go on the stage during the bubble stunt. Really a worthwhile night and extremely entertaining, except for the baby part just dragged on a little too long for my liking but still had some very funny elements to it.