« Transformers 2: Revenge of the Fallen review

ProdID: 6160 - Transformers 3: Dark Of The Moon
Directed by Michael Bay 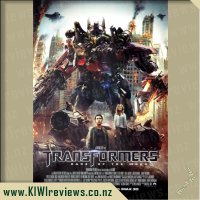 Sam Witwicky (Shia LaBeouf) and his new girlfriend, Carly (Rosie Huntington-Whiteley), join the fray when the evil Decepticons renew their longstanding war against the Autobots.

Optimus Prime (Peter Cullen) believes that resurrecting ancient Transformer Sentinel Prime (Leonard Nimoy), once the leader of the Autobots, may lead to victory. That decision, however, has devastating consequences; the war appears to tip in favour of the Decepticons, leading to a climactic battle in Chicago. After a lacklustre performance in the sequel 'Revenge of the Fallen' I was rather apprehensive, about this third iteration. The first introduction to the film actually had me intrigued; rewriting history in a way that was actually believable (ignoring the giant space robots of course). Providing a valid reason for the space race in the 1960's was really a spark of creative genius that really got me enthused about this film.

Unfortunately, beyond that the film let me down. The transformers are inconsistent at the best of times, sometimes appearing invulnerable while other times being taken down with one shot. But the real issue with me was identification; they all looked grey, and when they were robots, I had no idea who was good, and who was bad. In fact, the monsters were comprised of so may small moving parts that it was difficult to figure out what actions were being performed at all.

The human actors also did nothing for the film, apart from prove that they can survive things that no human should physically be able to survive. Rosie Huntington-Whiteley does little beyond look attractive, and Shia LaBeouf is annoying as always.

It was an interesting idea to see the Decepticons and Autobots able to switch loyalties. But it also exacerbated the issue with knowing who was on whose side. This film was more confusing than anything else.