Transformers 3: Dark Of The Moon review

ProdID: 6159 - Transformers 2: Revenge of the Fallen
Directed by Michael Bay 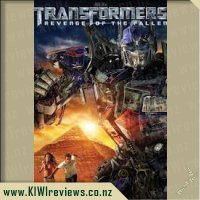 This was an average sequel. It honestly hard to write this review without just bringing up everything that was wrong with it. I found that bringing back the same cast of humans made it more difficult to string a coherent plot. Forcing in relationship issues, changing positions of other characters so that they are hesitant to help. It all just began to look like it was turning into a sitcom.

I was genuinely interested to see what was going to happen once Shia LaBeouf started seeing symbols and absorbing information with ease, but he still remained the helpless human that chooses to follow around giant rampaging, destructive alien robots around the world. Even with all the knowledge, he still failed at common sense.

I did however like the change in scenery, moving into the desert, and it gave a nice change of pace. But it eventually went downhill. The 'Devastator' was a Decepticon that everyone was looking forward to; a transformer that is huge because it is the combination of multiple transformers. But it was short lived, as it was an enemy that was too powerful, so the battle ended up being anticlimactic. In general, the entire ending of the film seemed to be put together last minute, as if the creators realised that they only had enough film for like half an hour, but were only half way through the movie.

The ending was haphazard, and it will continue to confuse me in many ways. The Decepticons are far more numerous, larger in size, and have no loyalties to humans. There really is no reason for them to be taken down so easily. This film just frustrates. even bringing back Megan Fox, did little to improve my mood when I watched this film.

With poor plot, and needless little quips and attempts at comedy ruined this film for me. It kept my attention well for the most time, but it wasted the opportunity to enthrall me.

I watched this because I had seen the first movie but I really didn't enjoy anything beyond the big explosions and the Transformers and Decepticons fighting each other. We are joining Sam a couple of years after the previous season, poor Bumblebee is being left at home and then turns up anyway, acting rather like a petulant child and Mikaela is left trying to keep the relationship going whilst he gets caught up in college. The start of this movie is just one cliche after cliche after cliche and then it all goes to fudge when it turns out the 'hot girl he keeps staring at' is a bad guy... Seriously, if that worked for her why can't it work for them all?!?

Going to Egypt, there is some wonderful scenery and scenes taking place, the pyramid scene is pretty awesome though I'm not sure why the giant robot needed testicles... There were just a few too many off moments that simply did not make sense or fit in with the overall aim of the film. The special effects are really good, some of the robots are stunning and the action scenes are pretty damn nifty but I'm just not a fan.