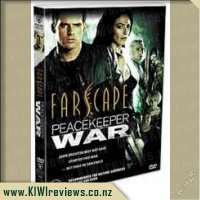 Season Four gave us such a 'what the hell is going on here?!?!' moment that left me wishing that the show hadn't been cancelled, happily enough they decided to give us an ending and two years later "The Peacekeeper Wars" came out and we finally get to answer the lasting questions from the series run of Farscape. All the characters that we know and love rejoin us for one final adventure, there are some fun moments but most of this is a very tense showdown though we do get to see one character pregnant that I wouldn't have expected.

This round up answers all the previous questions that have been raised and we have a rather big fight going on between the Peacekeepers and the Scarrans, this leads to lots of action and many many fight scenes and sadly we do loose one or two characters along the way, though with this kind of fighting it would have been too much of a fantasy if they had all survived. The special effects in this are great and there is so much going on, little time for rest but it is all worth it in the end. It's a shame that this show ended but this is a great round up and finish to the series.

The West family, their friends and associates laughed, cried, loved, drank and swore their way into the hearts of audiences at home and around the world.