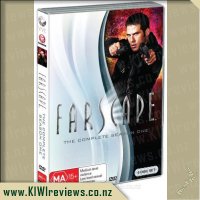 Flung through a cosmic wormhole, American astronaut John Crichton finds himself fighting for his life in the middle of an alien prison break, inside a Leviathan a living space ship on the far side of the galaxy. Hunted by the relentless Crais, a commander of the galactic enforcers known as Peacekeepers, Crichton joins forces with the alien convicts hulking warrior Ka Dâ ™Argo; blue-skinned Priestess Zâ ™haan; diminutive Dominar Rigel XVI; the giant symbiote Pilot and the irreversibly contaminated Peacekeeper Aeryn Sun. Each desperately seeks a way home, but first, they have to find a way to trust one another. Daring escapes and selfless acts of courage forge a measure of loyalty, friendship and even love.

The first seasonâ ™s breakneck action heats up with the introduction of the coquettish thief Chiana and the sinister Scorpius with his dreaded Aurora Chair. Arrival and departure, birth and death, rescue and betrayal, all lead up to a season finale cliffhanger that is, literally and figuratively, breathtaking.

I watched this when it first came out, my dad grew up loving Star Trek and other sci-fi shows and so for me dad, this was just natural to sit down and watch it. I have since borrowed the entire series from my dad and watched the whole lot with my husband. The basic premise is that Crichton is an astronaut, gets sucked through a wormhole (accidentally killing someone in the process, and this has a domino effect through the show) and ends up in a world strange to him. This is a big fish out of water show, more so than Star Trek etc. as Crichton is the only human on this side of the wormhole.

There is a great range of characters here that make up the crew on Moya (a ship that is fully alive) and this is what makes this a rather enjoyable show as the characters, they're not perfect, they are so so far from perfect, they're all criminals in one way or another, greedy, selfish, quick to anger etc. and this adds so much to the show. The special effects in this are good, the costume designs are really well done, as te have to be due to the range of aliens and they need to look real.

This is a fun sci-fi show and well worth watching.

Its Star Trek, but not as we know it! STAR TREK THE NEXT GENERATION on DVD and with completely NEW packaging.