ProdID: 6124 - Year of the Griffin
Written by: Diana Wynne Jones 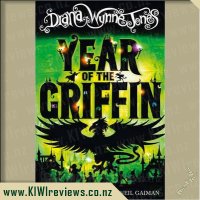 Year of the Griffin product reviews

The Year of the Griffin is the sequel to the Dark Lord of Derkholm, set in the same world several years after the abolition of commercial 'fantasy world' tourism from our world. Running a University for Wizards was never going to be easy. And with no money, no staff and no idea what he's doing, Wizard Corkoran is struggling. Especially when his students, handpicked from the wealthiest families around, turn out to be rather different than expected. The daughter of the world's Ruling Wizard is an enormous Griffin; King Luther's son is penniless. The emperor's sister is a jinxed exile, and the dwarf is a runaway slave. And that's all before the assassins start arriving...

What is great about this movie is that magic is more fluid and can change so easily depending on the person ie. expect something standard and typical and that is what magic will give you, if you expect something with a lot more flourish then that too is what you will get. This is a school that had me wanting to be a wizard a couple of years before Harry Potter and I love that there is a range of students from human to royalty to dwarves to griffins, so it is very inclusive, about the only disappointment was that everyone was pretty much paired off by the end of it.

Now what are you going to do when the aliens attack? Can you turn your car into an unmanned ground vehicle? Can you weaponise your robotic vacuum cleaner? Can you mount an auto-gun?

In the world of tomorrow, you will have to be prepared to face a myriad of dangers: descending aliens, prancing ninjas, groaning hordes of zombies, and more... and no-one in their right mind will stand with you against this onslaught. That's why you'll need... Robots.