« The Wizard of Oz review 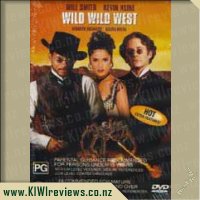 My dad is the one to thank for me watching this, in fact most of the TV and movies that I watched before I was thirteen was thanks to him (a good 80% my mum would have preferred I not see...) and the Wild Wild West was one that I watched and now continue to as a) it is a bit of mindless fun and b) nostalgia. West is a direct to the point agent, paired up with Gordon who is very much into disguises and gadgets. They team up to stop the maniacal Loveless, with some typical eye candy in the shape of Selma Hayek (who really does seem to be there just for her bosom).

There is a lot of silliness to this movie so it pretty much ends up as being part action, part western, part comedy and part spoof, all of which combines to make a fun movie, just not one I would watch often now. When I was younger I watched it at least twice a year, again thanks to my dad, but now, even though I own it on DVD, I've only watched it once. There are some fun moments, like the giant mechanical robot and some of the gadgets would be a tonne of fun, who wouldn't want a train like that!?