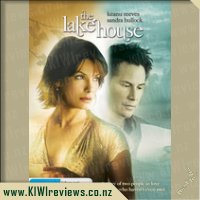 How do you hold on to someone you've never met?

A lonely doctor (Sandra Bullock) who once occupied an unusual lakeside home begins exchanging love letters with a frustrated architect (Keanu Reeves) who resides in the same house two years in the past. They must try to unravel the mystery behind their extraordinary romance before it's too late.

Watching this movie last night and in the beginning it was very confusing as I could't work out if it was her present or past but I did manage to follow enough to enjoy the movie. I did however wonder how a letter she put into the letter box in 2006 was able to be read in 2004 but kind of had to just think that it is a magic mailbox.

The acting was very well done, I liked that they read the letters out loud so you can follow what was happening and what people were thinking. They do a plan to meet but for some reason he doesn't show up and you don't find out why for a while and when you do find out what happened it is a bit heart breaking but knowing the magic mailbox there might be time to change the future.

I don't currently have this on DVD but wouldn't mind owning it. You have to watch with an open mind and accept strange things can happen. This is a good story line which was very well written and the casting was well done. I didn't recognise Sandra Bullock as she is normally in action movies, first time I have seen her in a romance and it worked well.

I watched this not long after it was released, with my mum, and the both of us rather enjoyed this movie, enough so, that whilst not remembering the whole of the movie but enough to know that it was a nice tale, when I saw it on sale as an ex-rental for only a couple of dollars, I grabbed it to add to my DVD collection. The premise is that Kate is moving out of a lake house and leaves a letter for the next tenant, what happens next, when he replies, is something that changes their life as first they discover that she is in 2006 and he in 2004, but just how much they come to mean to each other and that some how, in some way, at some time, they want to be together.

The plot isn't fast paced and there are no amazing fireworks when they finally figure things out, it is just a nice and lazy romance where you keep hoping that they find a way to make it work but there is also this kind of acceptance, at least for me there was, that they may just never end up making it work. I would so love a lake house like the one in this movie and it does make for some nice shots. This doesn't go crazy on the romance, it is a nice and slow ride but one that I am happy to be on now and again.