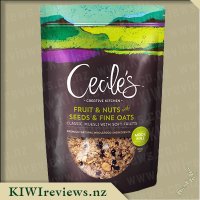 Classic and homely is the best way to describe the Cecile's Creative Kitchen Fruit and Nuts with seeds and fine oats. The soft fruits seem to melt in your mouth and the oats, quite literally, roll over your tongue. Serve with cold milk or yoghurt, or just eat straight from the pack for a delicious snack.
•  No Artificial Colours or Flavors
•  Wholefood Ingredients
•  Mixed by hand
•  Gluten Free
•  Source of fiber
•  Made in New Zealand

NOTE: This is the new branding and name for the product previously called "Cec's Autumn Harvest"

This product has a very appealing packet and I like that it is just a bag as opposed to a bag within a box. I love the mixture of oats, fruit and nuts. The combination is perfect and I really enjoyed the taste though it was probably just slightly too sweet for me with 18 g of sugar per 100g. At $13.50 for 500g this is a bit more pricey than I would want to pay but it is product that has a lot of goodness in it rather than just a lot of sugar and fillers.

The packaging is great especially having the clear window to be able to see when the bag is getting empty and also to be able to see how good the contents are. The bag is easy to open and has a close seal on it to keep the contents fresh and keep the ants out. I would like to try others in the range but I do like the ingredients in this range . I like my muesli with yogurt and this tastes great with yogurt and with the oats as a base keeps me full all morning. I can definitely recommend trying this product if you want a muesli different from the main stream brands. When I looked at the price of this product I thought it was on the expensive side, but when I tried it I realised that it is quite dense and a little goes a long way - it is quite filling and after eating some for breakfast I did not feel hungry again until mid afternoon. I tried it over several days and found that result was consistent. Having tried several other Cecile's products in the past, I was also reassured to find that this variety had the same high levels of raw ingredients and essential fibre.

I varied the way I served it so as to test the versatility. On the first morning, I served it with some fresh fruit and plain soy milk. It was nice although I overdid the fruit slightly so was not able to taste the cereal sufficiently. On the second morning I served it plain with soy milk, and was able to better taste the individual ingredients. Again very nice, but still something was missing. It seemed a little too lacking in flavour.

Finally, I tried it with chocolate flavoured soy milk instead of plain - and what a treat! This time I could taste the cereal but it was much richer and if it had not been so filling I would have been tempted to have a second helping. I don't eat many chocolate products, especially in confectionery form, although I quite enjoy a strong chocolate flavour in soy milk and in a milk-free mocha drink. But the combination of the chocolate with the cereal was the perfect meld of flavours.

I am now looking forward to trying this cereal with other flavoured soy milks like caramel and strawberry. I don't drink conventional cow's milk, but it comes in even more flavours, so I imagine the effect when combined with the cereal would be equally successful.

Finally, I did try the cereal as a trail mix (as recommended on the packet) but found it a bit dry and I kept dropping bits. I think there was more on the ground than in my stomach when I had finished so I think I will stick to having it as a breakfast meal and using a proper bowl to serve it.

I will be buying this product again because it is convenient as well as being proper food as opposed to processed food that is full of preservatives and flavour enhancers. But I will be sure to put some flavoured soy milk in my shopping basket as well!

Compared to the Strawberry and Cashew mix that I tried, this one was a bit disappointing. The blend of the different flavours in this muesli was still enjoyable, but the taste just seemed a bit...off. I'm not too sure how to explain the taste, but the seeds and nuts tasted a bit woody, with a slight bitterness. I did still enjoy the muesli, just not as much as I hoped I would have.

The sultanas added a nice taste, however. As did the golden syrup, which also added a nice golden colour to the nuts, and that gave a more appealing look to the whole thing. One ingredient I didn't enjoy was the coconut. Had there been more sweet ingredients, then perhaps the coconut would have worked out better; but given the slight bitterness of the nuts and seeds, it took away the balance.

As an experiment, I decided to try using the muesli as an ingredient for muffins. This experiment didn't turn out exactly as I hoped, however. While mixing the batter, I accidentally added too much milk, so I then had to add more flour to compensate, but that threw the whole thing out of whack leaving the flavour of the muesli drowned out and dry. If I had made the batter more carefully then I'm sure they would have turned out better, so I might just have to try again.

Overall, this isn't a bad product at all. The price is quite reasonable, not too expensive. The nutritional value appears quite promising as well. I recommend this product to others, as it may appeal more to others. I hope you find this product satisfying. Enjoy.

I was lucky enough to receive a bag of this cereal for review in the last round. I have tried some Cecile's muesli in the past and have always been impressed by their high quality. Recently they have changed their packaging. This new packaging is similar, however the branding and images used now are even more elegant than the previous look and feel of the brand. The image along the top feels like it would not be out of place in an art gallery.

The actual packet is easy enough to open and re-seal after use. The clear window at the bottom shows the great quality muesli you are about to consume as well. Inside the bag, there is a very inviting mix of seeds and nuts and cereal pieces too. Because of the combination of golden syrup and honey, and the fruit juice concentrate there is a punch of yummy sweetness to each mouthful. For this reason, I often found myself with my hand in the bag at my desk. I would eat a handful whenever I felt like I needed to see the vending machine.

The bag itself lasted me over a week despite all the non-breakfast snacking that I did as well. I really love sesame and sunflower seeds, and I'm a huge Brazil and Cashew nut fan too. The ribbons of coconut and all these yummy seeds and nuts were excellent and full of nutty flavour. I just loved that they were all whole pieces too. You really felt like you were getting your money's worth. A bag of this muesli will set you back $13.50. That is steep, but I do feel like the quality is there. I would buy this as a treat for me, and I would definitely consider adding it to a Christmas gift basket too.

Score: 8.7
Product reviews for listing 8367: Down to Earth Organic Chutney - Lemon Chilli -  Produced by Down to Earth

Sweet and spicy lemon chutney preserves the bright flavour of winter lemons for use all year long. Spoon it on roasted meats (it is especially tasty with leftover cold chicken) or serve with a mild cheese on crisp toast or crackers for an easy appetizer.