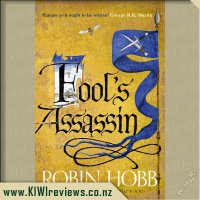 Tom Badgerlock has been living peaceably in the manor house at Withywoods With his beloved wife Molly these many years, the estate a reward to his family for loyal service to the crown. But behind the facade of respectable middle-age lies a turbulent and violent past. For Tom Badgerlock is actually FitzChivalry Farseer, bastard scion of the Farseer line, convicted user of Beast-magic and assassin. A man who has risked much for his king and lost more...

On a shelf in his den sits a triptych carved in memory stone of a man, a wolf and a fool. Once, these three were inseparable friends: Fitz, Nighteyes and the Fool. But one is long dead, And one long-missing. Then one Winterfest night a messenger arrives to seek out Fitz, but mysteriously disappears, leaving nothing but a blood-trail. What was the message? Who was the sender? And what has happened to the messenger?

Suddenly Fitz's violent old life erupts into the peace of his new world, and nothing and no one is safe.

It's been along time since I've read a good and genuinely different fantasy book - as with so many genres certain ideas start to get overused and become somewhat boring. This just happens to be one of those books. At first I was intimidated by it's sheer size but found that the pages seemed to turn quickly as I was thoroughly immersed in a new and exciting world with some common fantasy traits (magic, assassins, royal intrigue, dragons, etc) but written in a compelling and different way. This is the first book by Robin Hobb that I have read and it is written in the first person which is what previously put me off reading any of her earlier works. Oh how I wish I had read them or at least the other books related to this one (I'd definitely recommend reading them first) - it would certainly have helped me grasp the different characters and their relationships as well as the magic system a lot sooner. The world she has created is reminiscent of medieval times and while the author does touch upon some significant past events, she doesn't explain them in any great detail. I found the story to be somewhat convoluted but extremely well written - it's not often that I read a genuinely good book that leaves my buzzing with anticipation for the next one and bursting to share my excitement with friends.

In this book Robin Hobb makes a return to the Realm of the Elderlings and the lives of the Farseers. The story revolves around Tom Badgerlock, otherwise known as FitzChivalry, royal bastard of the Farseer line and former assassin. This book takes a look into his everyday family life which for the most part is quiet and peaceful. Now and again the author throws us a bone and the story will leap into action only to fizzle out again and have nothing come of it. This somewhat unusual pacing kept me coming back for more and there are all sorts of intricacies and mysteries that are carefully woven into the story which come to light towards the end of the book when things start to get really exciting. The ending is a bit of a cliffhanger and I can't wait until the next book to find out more.

I can't really say too much more about this book, as I don't want to spoil anything for long standing fans of the series, except that it's a must read for any fantasy fan.

Score: 9.8
Product reviews for listing 398: The War of the Flowers -  Written by Tad Williams

In the great city, in the dimly lit office of a mighty tower, two deadly creatures meet. A dark bargain is struck, and the master of the House of Hellebore gives an order: 'War is coming. The child must die.'

In our own world, a young man discovers a manuscript written by his great uncle. It seems to be a novel - a strange fairy tale of fantastic creatures and a journey to a magical realm.