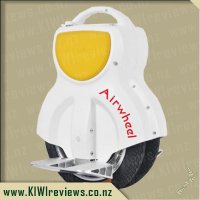 NOTE: This company has been closed down due to losing a Copyright Infringement legal action with Segway

This incredible dual wheel electric unit quite literally revolutionizes the personal transportation market. The self-balancing unicycle - AirWheel is already being dubbed as the "must have gadget". The AirWheel is the ultimate gadget for all. Whether you want it for fun, practicality or both, we have commuters using their AirWheel through the city on their way to work, students cruising their way to class, and even provide support for mobility and disabled users. The AirWheel unit operates very similarly to a SegWay. They are extremely fast charging and the battery makes these units extremely eco friendly and efficient in going across pavements, off road and even uphill.

The Dual wheel design of the Q1 provides a more stable, easier to master riding experience. The Q1 features a soft, comfortable chassis. It is tough, and easy to clean. It has 2 precision aluminium pedals either side to function as a mounting surface for you to stand on. The Q1 is environmentally friendly, hands-free and relatively easy to learn to ride. Compared to earlier models, it has upgraded logic circuitry, increased battery range and a generous pedal platform area.

I have to say, when I was young, I hated riding anything with wheels, but then I learned to ride a bike, then roller blades, then a segway, but now I have advanced to learning how to ride on a single wheel. This "gadget" effectively combines the one-wheeled nature of a unicycle with the gyroscopic motorized beauty of a segway, in the sense that the Airwheel uses the same technology that a segway uses to auto-balance and propel itself. It took me quite some time to learn how to ride this thing, as it is not as easy as one might think to balance one's self over a single wheel while trying to actually move around on it.

At first, I had to learn how to actually mount and stay on the Airwheel, which was quite tricky. My Dad suggested a technique, in which I hover one foot over one pedal, and then jump with the other foot, so that my weight landed equally on both feet over both pedals at the same time. After this, I needed to learn how to balance, which was quickly solved by knowing how to move backwards and forwards. Just like a segway, the Airwheel is highly sensitive, and can detect a fraction of a degree of tilt. This tilt does not even have to come consciously, but occurs naturally when you think "go forward", "go backward", "speed up", "slow down", or "stop".

The Airwheel's ability to detect and use these subtle shifts of balance is extraordinary, and makes forward/backward movement easy. Turning was the next challenge, but I found out (the hard way, of course) that I had to shift my weight on my feet beneath me, while maintaining balance by keeping my body above the waist upright to make small, subtle turns, while twisting my body suddenly to make quick, sharp turns, turning me around 90 degrees per movement (and that's because unless you are double-jointed, 90 degrees is about as much as you can rotate your upper body, before then suddenly twisting your legs beneath you).

The balance was amazing, and I was able to effectively stay in place by subtly moving forward and backward, so that inertia kept me stable, but I could stay in the same general location. After a while, all these necessary skills were collected, and I was able to use the Airwheel with (partial) ease! I had actually forgotten just how hard it was for me to use this until I invited my friend around and he had a go on it, he wasn't even able to get on it properly, and now I know why my Dad laughed while watching me practice using this gadget, it was out of pure empathy!

I practised moving around on the driveway at first, but on the second week of using this, I was allowed to take it outside our property, to do things like checking the postbox, getting movie snacks, or delivering presents to friends, it made getting from point A to point B a breeze! However, taking something like this out in public can't be done without attracting some attention. The most notable of these occurrences was when I went to go and check the post-box on the Airwheel, and on my way back home, one of the security guards in front of the WINZ building in the Dinsdale shopping centre signaled me to stop, and I damn near wet myself as I tried to imagine why.

Then the guy calmly asked what I was riding, and I told him about it, after which he explained that he saw me on my way to the post-box and wanted to ask me about the Airwheel, but I was gone before he could, so that's why he stopped me on the return trip. However, once I had introduced him to the Airwheel, other people going in, out, or past started asking me about the device, and they were all quite impressed. I was then stopped AGAIN when I was in front of the Fruit and Vege shop by a kid who had a "wow" look on his face the whole time.

My friends were equally impressed, Callum, the one who I mentioned earlier, said it was just weird, and laughed his head off when I did the Gangnam Style dance on it to make him jealous, he said it was just funky, and Christopher, who I delivered a present to on the Airwheel after dad strapped a small camera to the Airwheel to get some good footage for review purposes, thought it was quite awesome, and jokingly shouted "Showoff" at me as I rode away, to which I responded by yelling back "Not Showoff, just skilled!"

The device can also be carried as well as ridden, although it does have some considerable weight to it, but if it's a choice between carrying something heavy or getting thrown out of a store while trying to buy a bottle of Mountain Dew for riding this thing in a supermarket, I would choose the former of the two.

While learning to ride the Airwheel, most people prefer holding onto the strap that comes with it, but I actually found this strap a nuisance, and instead preferred to ditch the strap and ride without it, as it allowed me to swing my arms out to balance myself if necessary. The charging time is surprisingly short, taking only about 1 to one and a half hours to charge, after which , well, I still don't know when the battery runs out, as it still has over 75% charge. The Airwheel can go faster than normal walking pace, but not much faster, after a certain speed, I noticed the machine start to tilt backwards automatically, and this unbalanced me, causing to take a bit of a tumble, with no major consequences, except for a bit of DES (deflated ego syndrome)

Comparing this to a Segway, I would prefer this, for while Segways are easier to learn to ride, you can't easily ride a segway with no hands (including steering), whereas you can with this. I don't know why, but for some reason, while I was riding this, Wierd Al Yankovic's song "White and Nerdy" got stuck in my head, and I could figure out why until I remembered the fact that the music video had a guy riding a segway with no hands in it, and when this realization hit me, I could not help but smile smugly and imagined how nerdy and dorky I must look to other people!

The product is extremely expensive, but given the number of gyros and electronics inside the Airwheel, it is an understandable price. I hope that as technology develops, this kind of product will become cheaper and more widely available, because what they say is true: once you have learned how to ride an Airwheel, you never want to walk again. Riding this thing is still exercising, however, as your body makes hundreds of micro-movements, which quickly tax the body's energy, so beware: it is not all carefree and relaxing as you may think! All in all, I think that this is an AMAZING and next-gen piece of technology, and It is just a shame it was only on loan, as I could imagine many ways that using this could benefit one's day to day life, such as getting off a bus and having to walk the rest of the way to where you need to go.

To sum it up, I would highly recommend this product to anyone with a deep wallet who loves having a fun way to get from one place to another

Live hands-free on this UL 2272 certified self-balancing scooter from the world's leading brand of electric personal transportation. With its unique knee control bar the miniPRO allows you more interaction with your environment than any other two wheel ride. The miniPRO is not a toy; it was developed with advanced balancing technology that ... more...