« Petals in the Wind review 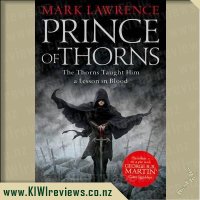 From the publisher that brought you Game of Thrones...Prince of Thorns is the first volume in a powerful new epic fantasy trilogy, original, absorbing and challenging.

Before the thorns taught me their sharp lessons and bled weakness from me I had but one brother, and I loved him well. But those days are gone and what is left of them lies in my mother's tomb. Now I have many brothers, quick with knife and sword, and as evil as you please. We ride this broken empire and loot its corpse. They say these are violent times, the end of days when the dead roam and monsters haunt the night. All that's true enough, but there's something worse out there, in the dark. Much worse.

From being a privileged royal child, raised by a loving mother, Jorg Ancrath has become the Prince of Thorns, a charming, immoral boy leading a grim band of outlaws in a series of raids and atrocities. The world is in chaos: violence is rife, nightmares everywhere. Jorg has the ability to master the living and the dead, but there is still one thing that puts a chill in him. Returning to his father's castle Jorg must confront horrors from his childhood and carve himself a future with all hands turned against him.

Mark Lawrence's debut novel tells a tale of blood and treachery, magic and brotherhood and paints a compelling and brutal, and sometimes beautiful, picture of an exceptional boy on his journey toward manhood and the throne.

I will start by saying that this book is dark fantasy and that is made very clear from the first chapter, so if you're not into death and destruction (burning, killing, raping, looting) then this book probably isn't for you. It's also written in the first person which I'm not usually a fan of but I think it really suited the authors writing style and this particular story, creating a more compelling read.

The book is set in an alternate reality of our Earth and often references familiar names (Robin Hood, Plato, Socrates, Jesus, etc) and while there is limited world building, it does create an air of mystery. As far as magical elements go (it wouldn't really be a fantasy book without some form of magic would it?) we have lichs, dream witches, leucrota (monsters), necromancers and even an oracle, just to name a few and while lacking in originality they still add an extra layer of danger and intrigue to an already dark and gritty plot.

The story is told in the first person by Prince Jorg who after a tragic incident when he was just 9 years old, throws his lot in with a band of outlaws in a quest for vengeance. After 4 years on the road he finds himself no closer to completing his quest than when he first left and decides to return home. This is when the main story really kicks in.

The authors writing style is concise and easy to read making for a fast paced, action packed and intense read. The chapters are short with flashbacks to 4 years earlier to fill in any blanks and provide insight into Jorg's personality and history. The book may have a dark storyline but it also had undertones of camaraderie and I enjoyed Jorg's wit and sharp tongue.

Jorg is an anti-hero. He is ruthless and immoral and seems way too young to accomplish some of the things that he does in this book, but when all the events of the past and the present are revealed, it starts to make a bit more sense. The ending was a bit anticlimactic and somewhat predictable but it shall be interesting to see where the author and Jorg take us in the next book.

At last he grasps the elusive chain of thought which will ultimately lead to his solution of the scientific disparity between the theories of Relativity and Quantum. However, amidst the triumph of creating the radical new Superforce Theory, the young scientist's wife has her own appointment with ... more...