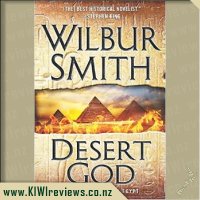 New York Times bestselling author Wilbur Smith - hailed by Stephen King as the "best historical novelist" and one of the world's biggest-selling authors - returns to Ancient Egypt in this breathtaking epic that conjures the magic, mystery, romance, and bloody intrigue of a fascinating lost world.

Game of Thrones meets Ancient Egypt in this magnificent, action-packed epic. On the gleaming banks of the Nile, the brilliant Taita - slave and advisor to the Pharaoh - finds himself at the center of a vortex of passion, intrigue, and danger. His quest to destroy the Hyksos army and form an alliance with Crete takes him on an epic journey up the Nile, through Arabia and the magical city of Babylon, and across the open seas. With the future of Egypt itself on his shoulders, Taita enters a world where the line between loyalty and betrayal shifts like the desert sands, evil enemies await in the shadows, and death lingers on the edges of darkness.

This is the fifth book in the Egyptian series, following 'River God', 'The Seventh Scroll', 'Warlock', and 'The Quest'. A series that have slowly been written over the last 21 years, and shows no sign of stopping. It is a significant and feat in itself.

I have always loved Wilbur smith novels, as they create such a vivid world with a web of intermingled characters that you get to see born, grow, and die; experiencing their loves, tribulations, and losses. This is one of those things that Wilbur Smith has always been amazing with; continuity.

However, this novel struck an odd chord with me. The previous installment followed the storyline of the chief protagonist, becoming a conduit of the occult gaining the name 'Warlock'. The storyline in itself became rather strongly focused on the supernatural, and became very difficult to swallow as a believable plot. 'Desert God' however, reverts back to where he is more simply a long-living, intuitive mind. The contrasts in character between this novel and the previous are rather extreme.

That all being said, I found this storyline far more believable a read. Coming more strongly from a military expeditionary standpoint, the directions and imagery were very easy to follow. But it was rather repetitive, and lacked a true plot to it. It begins after a major loss to the kingdom that he calls home, and ends before any significant battles are completed. Taita (the protagonist whose character we have followed for the entirety of the series) has reached his highest level of superiority yet, and yet this novel failed to excite me.

This was a story based on many of the religious beliefs of the time, and educated us a lot about the civilizations of the area, but beyond that, the storyline failed to keep me interested. The action was missing. There were no real losses. And it killed the suspense.

It was well written, and I liked that it had a firmer grasp of reality, but I dearly hope that the next installment has a storyline that will excite me. Fill me with the passion that I had when I first started reading these series.

Every once in a while you read a book that a) you don't want it to ever end and b) you pray that they make it into a movie. This is definitely that occasion. This book is fantastic it has everything you need in a novel history, romance, war, drama, love, action, comedy. In 424 you are transformed back to early Egypt where wars and trading princesses for favours is excepted and expected.

Taita is such an awesome character. He is a slave who has risen through the ranks to be a trusted member of the kingdom. Everyone listens to him and his mind is a thing of wonder. He is so egotistical that I was laughing out loud as he described his god like abilities over everyone else. He is very quick witted and a brilliant war mind.

The book itself is very fast paced. The scenes are explained so poetically and so vividly you swear you were there. I do not usually like war scenes in books but I had no problem keeping up with this, most were over even before they begin. Wilbur Smith definitely has a way with his words. I was a little concerned about reading it as had been told his books could be extremely complicated but I found this so easy to follow. There were the occasional word I did not understand but I knew the context so figured out the possible meaning.

I am in love with Egypt all over again and desperately want to travel to the The Ancient Lands. This book definitely left me wanting more. I would love to know what happens to the princesses and there prospective relationships. What will happen now that Crete's volcano has erupted and they were potential alleys. Will Egypt be victorious. So many questions and first and foremost what will happen to Taita.

All though the price is a little steep it is a fantastic book and it is worth its value. It kept me captivated for just over a week. It is amazing the hardship these people endured travelling over deserts, thirst creeping up on them and the poor animals. Or the terrible position slaves were in especially the ones chained to the seats of the boat. I am so thankful that I was not born in this era but yet I am still oddly fascinated by the whole thing.

Tymon leaves his new home and his beloved Samiha to complete his Grafting studies with the famous Oracle of Nur. But Tymon and fellow traveller Jedda find that locating the Oracle in a corrupt and lawless city run by pirates and slave-drivers is no easy matter.

Samiha's fate has been predicted by Grafters down the ages. When she is captured in Cherk Harbour and charged with grand herasy, there seems to be no way out... but Tymon does ... more...