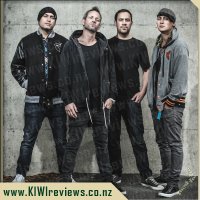 Blacklistt is the most current version of New Zealand rock legends, Blindspott, featuring all original members with the exception of the drummer, Shelton Woolright. While they still play the wildly popular music from their previous iteration, they have a catalogue of new material that has taken a different path.

Moving into the more melodic vocal side, the music has become more melodic and less hate-filled, but can still get the crowd jumping. Every time I have seen this band perform, the crowd is moshing before the music even starts. The crowd know the words to every song, will road-trip to multiple venues to see the band play as often as possible.

For a "rock" band, the music is diverse, and they are very clearly performers. Whether you are watching Damian jumping off of speaker stacks, and spinning around stage, or Marcus swinging his guitar around, you can tell that these guys are well rehearsed, passionate, and forever thankful.

Blacklistt do what they do for the fans, they will play in the small venues in the unknown rural areas, to the stadiums and arenas. They will perform on the floor, and on tables, all the way up to the biggest stages in the country. Wherever their fans are, they will play. And that is why they have such a cult following. I have met fans that have literally flown over from Australia, and been to every show up and down the country during a 12-date tour.

The music is passionate, full of energy, and every person that enters the venue becomes a recipient of that energy. This band loves their fans, and their fans love them back.