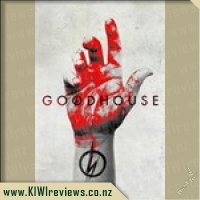 What would happen if you could see clearly into the genetic make-up of your friends and family?

America at the end of the 21st century: 17-year-old James doesn't even know what his real name is, though he feels if someone uses it one day, he'll know it's his. Kindness to others is not an option at Goodhouse, a brutally run corrective school for boys with criminal genes.


Awaiting him over the barbed wires of the school are the Zeros, a religious group who aim to rid the planet of impure boys like those at Goodhouse. But for James, his greatest threat is not the fundamentalists outside. His dream of walking through the gates as a civilian may yet be destroyed by the much deadlier threat from within...

A bold, visionary tale of a foreseeable future where genetic profiling is meant to prevent crime, but instead becomes a tool for oppression, Goodhouse poses urgent questions about freedom and slavery and what it means to be alive.

The cover of this book stopped me from reading this for several weeks whilst I persevered with another novel. They were weeks I instantly regretted as soon as I read the first paragraph. Related in the first person this book, set in futuristic America, tells the story of James who has been placed in a Goodhouse juvenile correctional facility since the age of three after genetic testing showed he had "criminal" genes.

James' story, set in the present time, interweaves with flashbacks to his previous residential facility La Pine, which burnt down after an attack from The Zeros who don't believe in rehabilitation or prevention and aim to destroy all those with the defective genes in the residential facilities.

I really enjoyed this book and it is gripping on many levels. I liked the way the story unfolded and the interweaving of James past and the development of his relationships as he struggles to understand what Goodhouse really represents and the role that those he meets within truly play. I was on the edge of my seat the whole book as to whether or not he should trust Bethany and if their relationship was doomed from the start.

Often stories set in the future have an air of suspension of belief about them but Goodhouse is based on so many truths from our present and past that it is believable that much of what James experiences could truly happen. The horrors that many youths have experienced in Juvenile (and indeed adult) correctional facilities is explored as the ordered but violent world in which James lives rather rapidly falls apart to reveal the true purpose of Goodhouse.

I would recommend ignoring the gruesome cover and open the first page for a very enjoyable and gripping story from a first time author who writes with almost an air of Wally Lamb. A great read and one I wish I had had weeks earlier than I did.

A New Zealand re-imagining of 'This Little Piggy Went to Market' with a special picnic twist, for readers aged 4 and up.