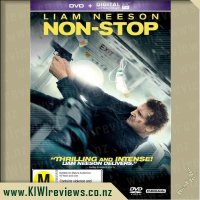 Global action star Liam Neeson stars in Non-Stop, a suspense thriller played out at 40,000 feet in the air. During a transatlantic flight from New York City to London, U.S. Air Marshal Bill Marks (Neeson) receives a series of cryptic text messages demanding that he instruct the government to transfer $150 million into an off-shore account.

Until he secures the money, a passenger on his flight will be killed every 20 minutes. Non-Stop, which reunites Neeson with UNKNOWN director Jaume Collet-Serra and producer Joel Silver, co-stars Golden Globe Award winner Julianne Moore. I was unsure about this film. It very much seemed like it would be a typical Liam Neeson movie; the quiet, misunderstood character gets into a situation and overcomes his flaws to find a solution by kicking ass. Well I guess that is quite general; all films follow that formula, but this film looked even more unoriginal than usual. Almost like a remake of "Air Force One".

But this is definitely a more modern version. It takes into consideration the changes in airport security standards since the terrorist attacks on the twin towers in America, and also in the improving personal communications networks that each person is capable of. I was a little bit confused by the use of transmitting devices on the airplane, as I am used to the idea of using flight mode or shutting off the phone completely, but I guess I can believe that the use of mobile phones on aviation flights (and being able to watch the news?) could be the norm for Americans.

Despite these technological changes that I was not really aware of, I was able to enjoy the film. It followed the traditional route, and as a pattern started to emerge, and you start to question whether there is really a risk, the pattern changes, and it throws you off. The layers within this terrorist plan are definitely elaborate, but different enough to keep the intrigue.

After the first half of the film it just accelerated until it exploded into action, and an unbelievably "Hollywood Michael Bay-esque" ending. I was wary at the start, but it just took a while to get going. Once on its way it was a rollercoaster!

I love Liam Neeson and usually find his movies spot on. I am still not sure where I sit with this movie. It is predictable but yet still has its suprises and reminds me a lot of Taken or Flightplan with Jodi Foster.

Neeson is a plane marshal and its obvious he has issues which also includes drinking. While on a routine flight from London to New York receives a text message which blows his fragile little mind and all hell breaks loose. Its the kinda movie where you have to guess who is the bad guy, what would you do in this situation and exactly how much of the movie is actual truth.

I felt a lot of the time the movie was hyped up for Hollywood and in 'real world' this would not happen. I did like the fact the passengers did not trust him and were talking among themseleves. At first I was like of course you would trust him he is an air marshal but then I thought about September 11 and what the passengers must of thought and done and then I also was wandering would I really take him at his word especially when he went a little nuts with his interigation.

The end crash scene was just beyond silly and the stunts were rediculous but yet it is still an ok watch. Holds your attention for most of the movie, although, would not watch again. Just a little far fetched for my liking and I wasn't gelling with his character.

First thing that comes to mind when I read the storyline was "Air Force One" with Harrison Ford, which was a great movie in it's time. So watching this I expected the same sort of movie plot only better as it is 2014.

The story starts out with air marshal (Liam Neeson) receiving a ransom and threats of a person on the plane being killed every 20 minutes, which sets him on a hunt to find and apprehend the person. This is where the movie gets interesting because it is more of a thriller than an action movie.

There is always a sense of suspense hovering you while you watch it. You instantly think to yourself who the bad guy might be, then you second guess yourself, then you think no there must be more than two, and so on. This movie constantly keeps your attention and has you thinking about what is happening and everything that does happen is unexpected. In a day and age where almost every type of storyline has been played out, that is a a huge achievement.

This movie, while a bit slow, was surprising and the plot was nothing I expected. It was a movie I would highly recommend others watch and for that I give it 8/10.

From Robert Eggers, the visionary filmmaker behind modern horror masterpiece The Witch, comes this hypnotic and hallucinatory tale of two lighthouse keepers (William Dafoe and Robert Pattinson) on a remote and mysterious New England island in the 1890s. As an approaching storm threatens to sweep them from the rock and strange apparitions emerge from the fog, each man begins to suspect that the other has become dangerously unmoored.