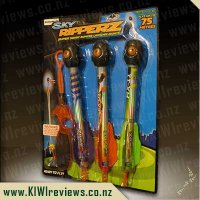 Disclosure StatementFULL DISCLOSURE: A number of units of this product have, at some time, been supplied to KIWIreviews by the company for the purposes of unbiased, independent reviews. No fee was accepted by KIWIreviews or the reviewers themselves - these are genuine, unpaid consumer reviews.
Available:
See the Stockists list on the website

Super-Sonic, Bungee-Launched Screaming Rockets! Sky Ripperz are amazing! Incredible aerodynamics, plus the Rip Zip Launcher, plus kid power can send these rockets soaring up to 75 metres. That's as tall as a 20 story building, or almost the length of a football field. Just attach your rocket to the bungee launch loop, and let 'em rip! Where will you fly your Sky Ripperz?!

When I got these to review I was excited that I got to open my parcel on my own while in hospital, I got to have a decent look before having kids going "can I have that, is that for me" because once they came to visit me that is what I got. They got to take it home under instructions that they had to wait till I got home (mean huh?) they did however wait.

Now the packet does say 8+ but with my dizzy look I thought it said 6+ so thought they kids 6 and 4 could have a go and they loved it, they both watched me once and got the hang of it quickly and off they went, they 4 year old boy got his ones about 8 meters his longest and the 6 year old girl she got her one 15 meters her longest. Hubby had a go and of course he had a measuring tape and measured out he 75 meters it claims they can do just to give it the real test and yup they can get to that with the whistle and all and can go more, we got them to about 80 meters

The 4 year old gave up and wanted to do riding his bike my the 6 year old was so excited with it she carried on, she loved them, the running around and chasing after them a bonus for us. She got the hang of it for the way she wanted to hold it being a left handed she couldn't work it out with the way we were holding it. Different ways of doing it, pointing it up and seeing how far she could get it. With the amount of fun she got out of it, I have already decided that is what my stepson is getting for Christmas and will be most likely getting it for a friends son too.

I believe the packet tells you very well how to do it, and what not to do to prevent getting hurt so that if I followed the instructions there shouldn't be any injuries. You really need a big area like a big park though because they can go very far. My parents came over and though they would have a go and being silly aiming at each other just gently and then my stepfather thought he would aim at the fence and instead of it hitting the fence went a few doors down so they had to go door knocking to find the kids rockets. While at the park I did however hit the kids that were running out to pick up already fired rockets and it didn't seem to hurt them which is a good thing.

The kids had already gone to the park a few times with their father and our friend plus her kids and I'd hear a big buzz about it from the kids each time they came back and they really wanted to go and play it again. Finally my husband decided to take the kids to the park and when half decided they didn't want to go he managed to wriggle his way out of it and get me to go, sneaky sneaky.

I went with my friend, her fifteen and four year old and my three year old. My three year old and I hadn't had any turns on these so I had a watch whilst my friend and her two had their turns as they'd all played with them before. My three year old, who is small for her age and slightly behind, tried to grab everything to do it herself but we managed to do it so that I held launcher whilst she held the end of the rocket. At the start she didn't understand to let go of the rocket but after about four turns she had worked it out and we were well in tune so that I held, she pulled and let go and by the time she was done she was getting it to fly about half a meter away from her!

Of course I had to have a turn and it wasn't too hard to get used to it. The first time I did it, I ended up shooting the rocket into my hand, making the launcher fly out of my hand, caused some laughs from everyone else. Once I got the hang of the whole getup I was getting it close to the promised 75 meters, had a whoops moment though, as each of the kids took turns running to fetch the rockets (even my pixie of a child was having turns) and one rocket that I shot off narrowly missed landing on the fifteen year old, talk about perfect timing...

All in all it was fun once I worked it out and it has a good challenge of trying to find the perfect way to hold it to get it to go further and further away each time. My three year old loved it and has gone with daddy to do it again today, so a hit with all ages.

My first impression of the rockets was that it looked like it could be a lot of fun but of course a bit dangerous in the wrong hands.

Using this for myself, every time I sent a rocket flying I ended up getting my hand smacked in the hand by the elastic band. I would have to admit that we didn't do it as per the instructions on the packet, however I did find that that position was a bit too uncomfortable and thus it was easier to put up with the whiplash than to change the position of how I was holding the elastic and firing off the rockets. I would say that I, myself, managed to shoot it off rather far, getting it to the full 75 meters, or pretty darn close to it.

We took it down to our local field so that we would have ample space, the packet says ages 8 and up, but my five year old and my seven year old each had a turn. My five year old was enthusiastic about it, she gave it a try with me helping, holding on to it with her and sending it off flying, she managed perhaps about a meter but that was enough to keep her happy. My seven year old needed my help to begin with, showing him how to do it but by the end was shooting it himself and getting it around ten meters away.

This was a fun toy for the family, despite the age suggestion the kids handled it well and are keen to give it another go. For sure, you should find a large, suitable field for this to shoot off in and keep an adult with the kids at all times as you sure as heck don't want to get hit by one.

Finally some good weather so off to the park with friends to see how the Sky Ripperz work and if they are going to be a lot of fun or a big pain in the butt. After an initial period of us going "is this right?" and a few "ouch that got my fingers" we had it worked out and could show the kids how to launch it themselves.

I notice the packing said it is aimed at kids 8+ but since we were all there I let my four year old have a few turns and he managed to get it to go a fair distance but obviously not near the 75 metres claimed on the packing but he was happy and thought that it was great.

I personally got it to go quite high and had a lot of fun. Before we realised an hour had passed but it felt like we could have gone on for a while longer, the kids got some exercise from running to get it and bring them back to launch again.

We found the fairest solution was to go in order of oldest to youngest so that everyone would have a go and have a few tries.

My friend got it to go almost the full 75 metre that was claimed and that really impressed the kids. I would recommend that adult supervision is needed as the older child was 7 and still needed heaps of guidance and tips and help.

With their funny faces and tufts of fur on top of their heads, little girls will love these spinning top toys. Furreal pets that swirl and twirl! The faster you pull out the DIZZY CORD accessory, The faster your pets will whiz all around!

Available in single and twin packs, and dont forget the twirlin dance studio too.