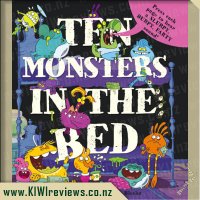 A monstrous take on Ten Green Bottles and Ten in a Bed, with farty, burpy, slurpy sounds. Ten monsters are very squished on a bunk bed. On each spread, a monster gets pushed out onto the floor, making a disgusting noise. Eventually, all the monsters end up on the floor and realise they're more squished than ever.

There is something charming and innocent about a young child collapsing with the giggles when somebody makes a rude noise! Adults are conditioned to apologise for the odd burp or tummy rumble, and as for flatulence, it is totally unacceptable in company. It was with interest therefore that I read this book. It certainly makes fun of those very adults who have lost the ability to laugh at themselves - and that means most of us!

The illustrations are a delight. Each character tells his own story through the pictures quite independently of the text, and even the sandwich has its own adventure! The colours are bright and attractive and there is nothing subtle about them, any more than there is about the characters and events they are presenting. I especially liked the ferocious goldfish who demonstrated just how unpalatable fleas can be.

Behind all the hilarity and rude noises, there is the underlying message that you should not be too quick to judge your friends just because they are different or display behaviours that you don't approve of. There is also the idea that bullying is not such a pleasant thing and often the bully is the one who loses out in the end. These messages are inherent in the story but are not pushed as such so the reader does not feel that he is being preached at. All the same, humour is one of the best ways to get a message across. We only have to look at some of the political cartoons in the daily papers to see that.

I read this book to my 11-year-old neighbour and his three-year-old sister. Both of them found the language hilarious but Mr 11 was a bit too cool to fully enjoy the book; he liked the story but did not dwell too long on the pictures. And, of course, he was quite capable of reading it himself. Miss 3, however, was enthralled by the illustrations and we read it several times more after he had gone off to play, and each time she picked different things out of the pictures.

In conclusion, this is a great book for pre-schoolers. It has a familiar rhyme pattern so the last word of each stanza can be anticipated, and the story itself is based on the nursery rhyme "Ten In The Bed" which can help children learn to count. Adults beware - you will find yourself enjoying it along with your preschooler!

I applied to review this product because I loved the bright and colourful images on the front cover and I thought my children would too. Also, since my daughter is the first born we mainly only have girly books and I'm trying to build up more books that my son might enjoy too. When it arrived I was not disappointed, the cover looks just as good, if not better, than the picture showed.

Aside from the main story which is a different, dirty, slimy take on the well known "Ten in a Bed" story/song I quite liked the extra little challenge of watching what happens to the fleas on each page. It was nice for the kids to having something to search for on each new page and they were so excited when they found them. Every single page in this book is full of the same bright colours and images as the cover page and has so much to look at and explore.

The story is very well written and you can tell from the cover that it is aimed at children (and fathers too possibly). When you see "farts, slurps and burbs" written on the cover, you can just tell it'll be one of those books where you will love it or hate it depending on your sense of humour but almost all children will love it. We took this book into my daughters daycare for it to be read to the class and all the children thought it was hilarious, the boys especially paid attention and loved the rude noises and actions that happen.

This is definitely a book for fun-loving families who are happy for their children to read a book about farts and burps. It was so much fun to read this book and I'm sure it'll become one of my kids favourites.

How could you not want to read a book about monsters to children? Ten Monsters in the Bed roughly follows the well-known storyline of 'Ten in the Bed', however, it is a lot more fun. The weird and wonderful monsters on the front cover will capture the interest and imagination of children and adults alike. The cover is worth spending a bit of time in itself. Each monster has its own characteristics. I love pottering around with creating my own monster pictures and I really enjoyed looking at all the fun monsters in this book.

Mr Four and Miss Two thought it was very funny when I read the bit on the front of the book about the fact that the book is "full of farts, slurps and burps". This really appeals to young children. In fact, we all found it funny to read. I also read the book to a friend's child and I think that this family weren't as funny or naughty as we like to be and I am not sure it they thought it was as funny as I did. Their loss really. Children think "rude" noises from the body are hilarious and they are guaranteed for lots of laughs.

Every page is full of activity and colour and is very much appealing to the viewer. It is always fun when the pictures can tell their own story and have additional information to what the text actually gives. Either the text or illustrations could be enjoyed by themselves. As one could expect, they also work perfectly when read together. At the beginning of the book, the author lets the reader know that there is something extra to look out for when moving through the book. Mr Four and I had fun "reading" the illustrations to follow the authors suggestion. This allowed my son to interact with the book and enjoy it even more. Interaction with a book also means that there are more opportunities to chat about as we read the book rather than having a passive Mr just listening as the book it is read to him.

I think that this would make a great present for any children who come from fun families, who are ok with some "rude" noises being a source of entertainment as they read! I have definitely noticed an increase of raspberries being blown in our house after reading the book. The kids laugh their heads off after running up to me and blowing a raspberry on my arm, back etc. This book is a lot of fun!

As Lionwolf struggles in the toils of ... more...