« Doctor Who: The Waters of Mars review 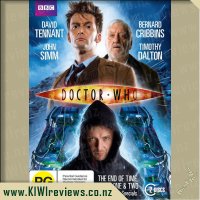 Doctor Who: The End of Time product reviews

Part One: It's the Tenth Doctor's final journey - but his psychotic nemesis the Master (John Simm) is reborn, on Christmas Eve, with plans for death and destruction. With both determined to cheat death, the battle ranges from the wastelands of London to the mysterious Immortality Gate, while the alien Ood warn of an even greater danger approaching, as a terrible shadow falls across the entire Universe. Will this be the last Christmas for the human race?

Part Two: Sees the Doctor facing the end of his life as the Master's victory unleashes the greatest terror of all. With an ancient plan closing around the Earth, only the Doctor can stop the cataclysm - but is the price too great to pay? Joining The Doctor in this two-part special are key characters from Series 1 to 4. These include his oldest enemy, the Master, played by John Simm (Life on Mars, State of Play), former companion Donna Noble played by Catherine Tate (The Catherine Tate Show), old favourite Wilf played by Bernard Cribbins (Down to Earth), along with former Doctor Who regulars: Rose Tyler (Billie Piper), Jackie Tyler (Camille Coduri), Torchwood's Captain Jack Harkness (John Barrowman), Martha Smith-Jones (Freema Agyeman), Mickey Smith (Noel Clarke), Sarah Jane Smith (Elisabeth Sladen) and the Ood.

While it's a sad time for fans of David Tennant, as he bids his final farewell as the Tenth Doctor, the beauty of being a TimeLord is that the Doctor regenerates... and so The End Of Time is intriguing as well as sad as it also sees the emergence of the Eleventh Doctor, played by exciting young actor Matt Smith. Matt's adventures as the Doctor really begin in Series 5, which is still in production, but this preview of the Doctor's new personality is sure to whet fans' appetite in anticipation of the new series.

Not a favourite of mine in the series but still, when having a Doctor Who marathon one must watch each episode and in order so naturally I had to watch this.

This is a two parter that brings the Doctor and the Master back together again, the Master has been reborn by a cult but his ex-wife sabotages it and thus he isn't fully normal. The Doctor meets with him and attempts to offer his aid but the Master is abducted, then healed and he then uses the device to turn all in his image. The Doctor has to fix things and turn it back to normal, all whilst there is input from the Time Lords trapped on Gallifrey and the impending death of David Tennants Doctor.

The acting was all well done, as one has come to expect but I didn't find the plot to be really well done and I feel that it would have been better as a shorter episode, it just didn't quite have the same flow to it and it felt like a bit of a let down all around. The ending is a nice little nod to all the companions that the 10th Doctor had on his journey, some might find it sappy, and it was, but it was also rather sweet.

A good enough addition to the series but certainly not a favourite.

For more than 70 years, Buzzy Bee has held number one place as New Zealand's favourite toy. This first animated television series sees Buzzy Bee and friends transformed into adorable animated characters. Join Buzzy Bee and all his friends on their new adventures in Rolling Downs.

The series characters are voiced by a stellar line-up of ... more...