Home > Categories > Books > Fantasy > The Age of Unreason : 2 : A Calculus of Angels review 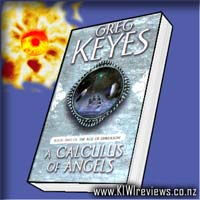 The Age of Unreason : 2 : A Calculus of Angels product reviews

1722: A second Dark Age looms after the devastating impact of an asteroid, unnaturally drawn to Earth by dire creatures who plot against the world of men. Sir Isaac Newton and his young apprentice. Benjamin Franklin, have taken refuge in ancient Prague, seeking the secrets of aetheric beings whose vast powers and new sciences have so nearly destroyed humanity ... yet who may prove to be its last, great hope.

But their safety is tenuous, as Peter the Great marches his unstoppable forces across Europe. And half a world away, Cotton Mather and Blackbeard the pirate lead a party of colonial luminaries back across the Atlantic to discover what has befallen the Old World. With them sails Red Shoes, a Choctaw shaman whose mysterious connections to the invisible world warn him that they are all moving toward a confrontation as violent as it is decisive ...

It is always a dangerous endevour, mixing 'known' history with fantasy, taking historical figures and placing them in a fictional or fantasy world "as it might have been if... " so it was with some interest I started reading this book. Not having yet read the first book, it took a few chapters for me to understand the various dynamics between the characters, and the events that led up to the supernatural tragedy that shaped the world they now live in, but once I had the idea it was easy enough to go back and start reading again and flow along with the plot.

Though the plot does get a little skittish, a common effect when an author is trying to bring a number of disparate and distant groups together into some coherant confrontation, it still retains it's overall course really well, making for a good solid read. The ability to keep track of multiple storylines and characters as they travel their separate paths sure helps.

I was really taken by Keyes use of historical evidence and key concepts of alchemy, history, engineering and geography, managing to weave them all into a new and different past that somehow still managing to retain enough similarities to what we call our known history to give rise to thoughts of 'What if..." - a brilliant gift.

The main characters in the story are stunning in their consistency and detail, while the minor players are 'solid' enough to seem genuine yet are not overly filled in, leaving them clearly part-actors in the bigger drama. The aetheric beings are of particular interest to me, as they are known by a number of names throughout the book, yet no clear definitions are made, other than to claim that as Angels or Demons, they are all the same... and that there is a form of civil war going on in the higher harmonies of the universe.

This really caught my attention due to it's similarities with some Quantum Physics theories that would state that matter does not exist as anything solid, simply a dense cluster of sympathetic virbations or harmonies in the base substrate of reality, aka the Aether, to use the old Alchemists term. And as a quantum-religious person, ie. someone who has scientifically different ideas about a god-entity, the 'origins of the universe' theory expounded by one of the main characters, Crecy, was simply amazing to contemplate.

Overall, I was quite taken with this book and the thoughts it provoked. If you are simply after an enthralling read, this book will fill that need, but if you are a thinking person, you will find many extra layers that will captivate you. A brilliant book that only scores low on the Realism scale due to it's sheer determination to NOT follow what we accept as the truth, but instead blazes a new trail of What If...

This is not a bad thing, in my opinion.

The once shadowy activities of special forces have grown into an increasingly exposed element of 21st century warfare and anti-terrorist activity. Here, in one giant unputdownable volume, are 40 of the most dangerous special operations ... more...