Home > Categories > Movies > Comedy > What We Do in the Shadows review

« I Survived: The Nazi Invasion review

ProdID: 5594 - What We Do in the Shadows
Directed by Taika Waititi , Jemaine Clement 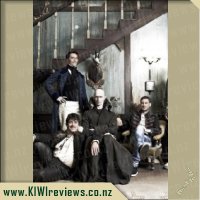 What We Do in the Shadows product reviews

"Are you pre-deceased?" With lines like that I've had a lot of fun watching "What we do in the Shadows".

I wanted to see this movie as I had seen the trailer and loved some of the spoofs about vampires and the likes, starting with the vampires trying to get into a club and having no such luck as they weren't being invited into the building and as one knows, they can't get in if they don't get invited in. Another part that drew me to the movie is that it is a New Zealand film featuring New Zealand actors and I love that despite some of the actors having fame overseas, this country is still important to them.

The movie itself is done as a documentary, something that also caught my eye as why spend centuries in hiding, still try to stay secret and yet allow yourself to be recorded. There are plenty of great one liners that right away had me laughing and repeating out loud, not many films get that response from me. The acting and plot is cheesy as anything but it is really well done and the plot is basic enough that there is plenty of leeway for jokes and entertainment.

For such a cheesy movie the acting is spot on and the jokes delivered well, I've thoroughly enjoyed this movie and I may well end up owning this on DVD.

When I first saw "What We Do in the Shadows" advertised I wasn't sure it was going to be my type of movie at all. My husband however is a major supporter of New Zealand films so was keen to head along to see it. So we headed off for a movie date and I had very little expectations of the movie and was not expecting to enjoy it. I'm pleased to say though I was in for a good surprise, not only did I enjoy the movie I laughed from start to finish!

What We Do in the Shadows is done as a mockumentary and introduces us to a group of vampires living amongst us in Wellington. It turns out vampires have many of the same issues as the rest of us including trying to fit in and sorting out flatmate issues!

Right throughout the movie there is great one liners and wonderful explanations to the vampire way of life that will have you in fits of laughter. The cast all play their parts so well bring their own wee twists to each and every character. Though it's a fairly short movie at just under an hour and a half I think any longer they would of ruined it by dragging it out too much and added un-needed parts just for the sake of it.

What We Do in the Shadows is well worth seeing it is one of the best New Zealand movies in a long time. It's one of the few NZ movies I am keen to add to my collection and I am willing to watch again. There were so many great lines throughout the movie I'm sure the more you watch it the more jokes you will pick up.

A young man (who is the legendary Don Juan?), comes to New York in search of his lost love. Feeling like he has nothing to live for, he attempts to commit suicide from atop a billboard. Dr. Mickler, (played by Marlon Brando), is a soon retiring psychiatrist who helps Don Juan (Johnny Depp), come to his senses.

He brings the costumed boy to the psychiatric hospital, in hopes of helping Don Juan find his identity. The doctor works with ... more...