« The Hobbit: The Desolution of Smaug - Cloaks & Daggers review 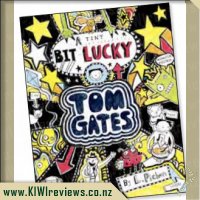 Honest, silly, and laugh-out-loud funny, Tom Gates is a superb and accessible voice.

I had no idea what I was getting myself into when I requested this book. I have not heard of Tom Gates and was unsure what it was going to be about.

From the first page you are thrown into his world. It starts very fast and it is basically about his life over a couple of weeks. It is just the rambling of a young boy and everything he thinks about and does is writen up. From attending school, discussing his sister or the next door neighbours cat, no stone is left unturned. It was not exactly gribbing reading and I found my attention wavered a bit but I must admit I loved the story 'The Special Recipe' and really wanted to find out how it would end.

The graphics throughout the book are not my kind of thing. They are basically scribbles which resemble things I prefer sharp pictures, but for the age group it is aimed at I am sure it works. The story is very basic and I am sure school age children would enjoy or at least relate to a lot of the subjects raised in the book.

I can honestly say I won't be rushing out to read another Tom Gates book again it was a tad immature for my liking and really I didn't gel with the characters. As fast as the book starts it just stops, no real warning and no real wrap up it just ends.

I feel like I'm seeing the name Tom Gates everywhere at the moment. If not on my emails, in social media or at the school. Having recently tried a Liz Pichon picture book, I was ready to give this Tom character a go. So we settled in to read this over the last two days.

The make-up of this book is a similar style to many chapter novels these days. Lots of illustrations and doodling through-out. It breaks up the words quite a bit and makes the read easier overall. This book is about Tom and a few things going on in his life over the course of a week or so.

It's written as if by a school aged boy. For this reason, sometimes it did get a bit boring. It was quite realistic in how the boys would be and was fairly fast paced. It's just that there was a point, for example, when they were meant to be practicing a song in their band and they did everything but practice. So that whole time I was thinking, when are they actually planning on trying the song?

Other than some frustration from me, at the way the characters wasted time (it's been a while since I was that young clearly). I could see the humour in a lot of the silliness. The flour incident had me giggling, the ponging school bag and basically any time he got something on himself or his things that he shouldn't have. Those were the parts that really made the story for my daughter but I think it could have been a shorter book and had all those elements. There's lots of little sub-plots strung together with silliness. Plus there is a whole other book inside too, which we found a fun little read - something Tom's teacher reads to his class.

I think if I was a school aged boy or girl, I would enjoy this book. Tom is a bit of an anti-hero. He isn't the most popular boy in class, but he has good friends and some interesting times. There's a bit of larking about which would give most kids a giggle. I think I just went into it a bit too serious. The mum in me did some head shaking, and once that starts it is hard to remember my sense of humour. My daughter liked the silly parts but the rest kinda went over her head a bit. She is 7 so maybe she is a little young for Tom Gates yet.

In this graphic adaptation of Edgar Allan Poe's works, the celebrated narrative poem The Raven and several of his short stories are brought to life by Pete Katz's superbly dark illustrations. Poe was a master of Gothic fiction, and the genre's core themes of horror, death and romance feature strongly in this collection, which includes The Raven, The Fall of the House of Usher, The Masque of the Red Death, The Black Cat, The System of Doctor Tarr and Professor Fether.