« Aladdin 3 - The King of Thieves review 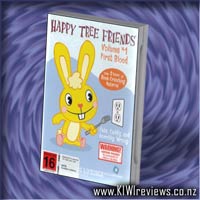 Who are the cutest, most cuddly cartoon characters around? The Happy Tree Friends of course! They're so cute and adorable you'll want to squeeze them until their little eyes pop out! If they don't beat you to it, that is.

These 'lil critters are sure to tug at your heart and make you laugh so hard you'll break your funny bone! Meet Cuddles, an unassuming little bunny rabbit who starts each episode with a smile and ends each episode as a pile of mincemeat. Meet Nutty, a cute, charming little chap whose addiction to sugar rushes takes him into even greater peril.

And of course there's Flippy, a kind, considerate especially cuddly member of the happy tree friends clan unless a random noise or flash of light sends him crashing back to his 'Nam nightmares and he engages on a Hungerford style slaughter spree in Happy Tree land.

The happy tree friends are made up of a group cute, cuddly animals who's short cartoons are not for the weak or faint hearted. I thought Itchy and Scratchy were good when it came to cutting, disembowling and blowing each other up but they have nothing on The happy tree friends.

The happy tree friends are like Itchy and Scratchy, Southpark, Bevis and Butthead, with a dash of angry beavers. Some of you will love the carnage and think this is a great show, while others will hate it and want it banned. The happy, cheerful music shows a complete opposite of what you are watching, but is the kind of music you would expect to find on a children's show. With it's R-16 rating, I wouldn't let any child watch it.

Well, of all the things I have seen in my life! I thought I had seen it all and then someone else had to come and top it. This DVD is by far the worst thing I have seen. They could have rather left the disc blank and it would have been better value for money, at least then you could have put your own stuff on it.

That's all I have to say about that!

This has to be one of the most strange cartoon series I have ever come across. At once strange, funny, shocking, and just plain WRONG in a 'right' kind of way.

The best way to describe this show is 'Short, sharp knocks to the head. South Park meet Itchy & Scratchy, with a dab of Ren & Stimpy thrown in for sheer wierd factor!' This DVD will shock you while you laugh.

Even with the polygon-cartoon nature of it, the graphic violence is rather sickening... which is just what the doctor ordered for some peoples' sense of humour. It leaves the 'Mr Hankie' level of gross far, far behind. Random amputations, disembowellings, decapitations, stabbings, crushings and breakages... well, it can be a bit much, which explains the R-16 rating.

The happy, boppy music that cheerfully plays throughout is a stark contrast to the visual carnage that fills the screen within seconds of the opening credits. As is the closing credits, which feature an inspirational or sensible message. Totally off-the-track, totally!

Overall, a bit of a mixed bag. Some will love it, some will want to ban it. Your choice really. If you aren't too sure, watch TV 4, as the shows are thrown into the adverts seemingly at random. If you catch one, and like it, you'll want to buy all the DVDs as they come out. :)

Orange Is the New Black (often abbreviated to OITNB) is an American comedy-drama series created by Jenji Kohan and first released on Netflix on July 11, 2013. The series, produced by Tilted Productions in association with Lionsgate Television, is based on Piper Kerman's memoir, Orange Is the New Black: My Year in a Women's Prison, about her experiences in prison.

The story of Piper Chapman (Taylor Schilling), a woman in her ... more...