« Aladdin 2 - The Return of Jafar review

ProdID: 544 - Aladdin 3 - The King of Thieves
Directed by Disney Classics 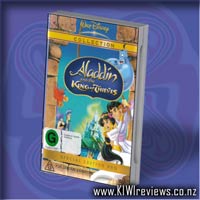 Disclosure StatementFULL DISCLOSURE: A number of units of this product have, at some time, been supplied to KIWIreviews by the company for the purposes of unbiased, independent reviews. No fee was accepted by KIWIreviews or the reviewers themselves - these are genuine, unpaid consumer reviews.
Available:
29.99

Your third and final wish is granted for one more spellbinding adventure starring the original gang from Disney's classic ALADDIN.

With the hilarious voice talents of Robin Williams as the Genie, the amazing Aladdin trilogy ends as triumphantly as it began - with breathtaking suspense and movie-making magic. All of Agrabah has anxiously gathered for the royal wedding of the century.

But before Aladdin and Jasmine can say "I do" the evil Cassim and the Forty Thieves interrupt the ceremony looking for the evil Hand of Midas - a treasure that turns everything it touches into gold. With the outrageously funny Genie providing the laughs, Aladdin embarks on an extraordinary adventure leading to the true identity of his long-lost father...and ultimately his marriage to Jasmine.

The third in the Aladdin series, this episode FINALLY sees Aladdin and Jasmine married, and as a nice add-in twist sees Aladdin reunited with his long-lost father... despite the best efforts of the infamous Forty Thieves.

With more hair-raising carpet rides than you can shake a stick at, lots of action and amazing acts of acrobatics, jokes and laughs galore, plus the usual assortment of musical numbers scattered throughout, this is a great conclusion to the Aladdin saga.

For those who enjoy a good bit of trivia: The first idea for this story line involved a villain from the Aladdin TV series named Mozenrath. The plot was that the hero and villain would turn out to be brothers. However (according to one of the writers) everyone thought they should steer away from the TV show and that, in combination with trouble getting in touch with 'Johnathan Brandis' (Mozenrath's voice), prompted them to move on to another relative of Aladdin's - his father.

Overall, much in the same vein as the previous 2, but you simply have to have it if you want to see the finale of the tale of Aladdin, the Streetrat fate smiled upon.

When a group of petty criminals is hired by a mysterious party to retrieve a rare piece of found footage from a rundown house in the middle of nowhere, they soon realize that the job isn't going to be as easy as they thought.

In the living room, a lifeless body holds court before a hub of old television sets, surrounded by stacks upon stacks of VHS tapes. As they search for the right one, they are treated to a seemingly endless number of horrifying videos, each stranger than the last.