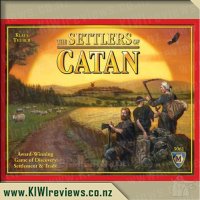 This is the base game - You will require this to play any expansions or extensions.

One of the most successful games of all time, Settlers of Catan is a trading and building game set in the mythical world of Catan. Players roll dice to determine which resources are generated each round and then must strategically trade those resources with other players to get what they need to build their settlements, cities and roads. With multiple ways to gain victory points and a board that changes in every play, Settlers of Catan is a game that can be played hundreds of different ways. The base of a hugely successful franchise, with multiple engaging expansions, Settlers is the core game of many collections, and is a wonderful way to spend time with family and friends.

The Settlers of Catan from Mayfair Games is an award-winning strategy game where players collect resources and use them to build roads, settlements and cities on their way to victory. The board itself is variable, making each game a little different from the next. Each round of The Settlers of Catan is intended to keep three or four players ages 10 and above engaged for up to 90 minutes.

The Settlers of Catan is said to be one of the most successful games of all time and it is easy to see why. This game is complex enough with strategy, trading and building that it never seems to get boring or old and yet it is no too complex that older children can't join in the fun and start playing with you.

I was first introduced to this game by some friends and I was immediately hooked! It keeps you well occupied and well entertained for about an hour to an hour and a half which to me is a perfect amount of time for you to really get into the game and play good strategy while at the same time not taking so long that you 'get over' the game and get board really quickly. Although this game is meant for 3-4 players, my husband and I have played it with just us too and while it isn't as good as it is with more players it does still work well.

Once you start this game it is likely that you too will be hooked and can't get enough of it and once you have shown it to all your friends they will want to join in too! If this is the case then I would highly recommend that you also get the 5-6 player extension. This means that the game is still the same but the board is slightly bigger so that there in enough space on the board for more people to play and not get overcrowded. There are also a few different expansion packs that you can buy to add onto this game which means that once you have mastered this game and are ready for something a bit different, you can add on an expansion pack (such as Seafarers of Catan or Traders and Barbarians) to give you a whole new way of playing Settlers of Catan.

Overall I would HIGHLY recommend this game. It has become a sure favorite in our house and I have loved it so much that I have also brought the Kids version of it so that when my children are a bit older we can start playing it with them on family games nights.

If you are looking for something to branch away from Monopoly and make family game nights more interesting, or if you dare not even bring out Monopoly after memories of disastrous games nights when you were a kid, I can highly recommend Settlers of Catan as a family game with a lot more substance.

Settlers of Catan is often seen as a gateway game from the childhood games that most people have grown up knowing, into a whole realm of games that many don't even know are out there. The good news is that Settlers of Catan is fairly easy to come by in stores and online these days. It's not the cheapest game out there, but it is well worth the money for it's playability over and over again with an ever-changing game board and different strategies that can be taken. And even though the base game provides so many hours of fun in itself, you can also buy expansions to create new and interesting versions of the game. These I'll review separately, and although they are great additions, they are certainly not necessary.

The game plays as follows: The board is set up either randomly or in the suggested starting-game format with players each placing a starting settlement and a couple of roads. The placement of these could affect the whole game as players want good spots to earn resources during the game, so I'd suggest the suggested starting layout for a first game until you understand the board a bit more. On each person's turn, they roll the dice and then resources are distributed (not just to that player) according to the dice roll. Then some trading can go on (more interaction even when it isn't your turn), some possible building or buying and then the next person goes.

The game is only intended for 3 or 4 players although you can buy an expansion pack to allow up to 6 players to play. Although non-official 2 player rules can be found on the internet, it's not really a 2 player game. It says age 10 and up, but I've heard that 8 year olds can probably play this game however I've only played with adults. Games take about an hour give or take although allow longer for new players. I believe the rules are fairly simple and easy to learn, but as this game has a bit of substance to it, this does make for more rules to learn (or the need to refer back to the rule book occasionally for your first few plays), but it is easy to enjoy your first game while you are still learning, and it is a game that new and experienced players can enjoy playing together.

This game does provide a nice balance of luck and strategy and is not too taxing for a family game. There is a great element of being able to help each other by trading, however you can also block where others want to build and block their resource production by way of a robber too, but it doesn't necessarily mean you are screwed over for the whole game. If you want an advanced game of pure strategy, then don't buy this game - I have plenty of others I'd suggest, but if you want something relaxing and enjoyable and playable over and over, then I definitely recommend Settlers of Catan.

Who would have guessed that your uncle with the bald spot could hum the BeeGee's "Stayin' Alive"? You'll find out during a game of Cranium, as you hum, whistle, sketch, sculpt, act, puzzle, and even spell backwards to win.

Cranium, the smash hit Game of the Year, gives everyone a moment to shine.