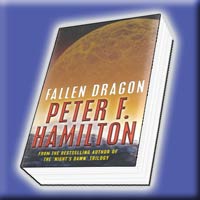 Disclosure StatementFULL DISCLOSURE: A number of units of this product have, at some time, been supplied to KIWIreviews by the company for the purposes of unbiased, independent reviews. No fee was accepted by KIWIreviews or the reviewers themselves - these are genuine, unpaid consumer reviews.
Available:
in any good bookstore

Twenty years later, he's the sergeant of a washed out platoon taking part in the bungled invasion of another world. The giant corporations owning the remaining starships cynically call such campaigns 'asset realisation'. In practice it's simple piracy.
While he's being shot at and firebombed by disturbingly effective resistance forces, Lawrence hears stories of the Temple of the Fallen Dragon - the holy place of a sect which worships a mythical creature supposed to have fallen from the sky millenia before the first humans arrived. It's priests are said to guard a hoard of treasure large enough to buy lifelong happiness - which information prompts Lawrence to mount a small private-enterprise operation of his own...

In Fallen Dragon, Peter F Hamilton once again brings to bear the universe-encompassing imagination, dazzling technological invention and sheer story-telling mastery that has made his previous novels into international bestsellers.

This book is a real twister... the blurb on the back cover is NOT mentioned in the story at all (Lawrence hearing rumours of a Temple... not true! He SAW IT on a previous mission!) so I guess whoever wrote the blurb took a bit of 'artistic licence' in that respect. The book is slow to start, jumps all over the place (so it's difficult to tell which passages refer to his first mission to Thallspring, and which to his second mission, and generally doesn't make a hell of a lot of sense until about 75% of the way through the book. At 800+ pages, that's a long way to read before it all starts to tie together. I can see many semi-buffs giving up before the good bits start!

BUT... when the story DOES start to fall into place and all the characters have their secrets revealed, the book makes a stunning and not entirely predictable ending. Sometimes fairy tales ARE real.

Overall, a good book for the price - there's certainly plenty of body to it. If you have read any other of Peter's books (and I highly recommend them, a lot easier to get to grips with, especially his Night's Dawn trilogy and companion books) you will find this book very easy to immerse yourself in... re-readability is low because of the drawn-out nature of it... it's another Long Cold Night Alone type book.

I had a number of embarassing situations where I got so lost in the book (in the final chapters) where people had to nudge me to see if I was OK. Don't order takeaways and sit there reading this book if you are near the end... the staff don't like having to yell at you from 3 feet away to break through to you. :)

And indeed, he's right, he's not a worm. So what is he? And is it a good thing to be? Scott Tulloch has created a hilarious dialogue between an unlikely pair, culminating in a dramatic twist at the end.