ProdID: 5273 - I Even Funnier: A Middle School story
Written by: James Patterson 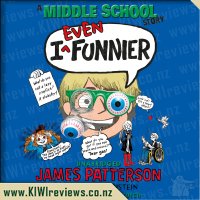 I Even Funnier: A Middle School story product reviews

Middle schooler Jamie Grimm has ig dreams of being the best stand-up comic in the world - and he won't let the fact that he's in a wheelchair get in his way. I even funnier is the follow up story to I funny.

I even funnier, a middle school story is the follow up to the best seller I funny, a humorous story that naturally appeals to teenagers and kids the world over. James Grimm, the main character, is in a wheel chair, and he really wants to be a comedian and when he wins a contest for child comedians, and is even more determined to become a stand-up comic, and his wheelchair wont stop him.

I even funnier, is a wonderful story for adolescents. James Grimm was not born needing a wheelchair, in fact he was injured in an accident, resulting in his ending up in a wheelchair. He loves comedy, and wants to be a stand-up comedian, and even though his wheelchair should not matter, James views it as something that will hold him back from his dream. Like many adolescents James must contend with bullies, he likes girls just as much as the next guy, and he has to battle lifes problems just like many kids do. And so young teens can relate to some of what James goes through.

Lots of good laughs happen through-out all of this, and Jamies attitude is admirable, because of everything that has happened to him. I recommend reading it to find out. Primary and intermediate and some high school students particularly boys will really enjoy this series of books. Especially with jokes like:

A woman gets on a bus with her baby, and the driver says to her ''that is the ugliest baby I have ever seen''. The woman sits down next to a man and says, ''the driver was very rude to me''. The man says ''Go up to him, and tell him how you feel. I will hold your monkey''.

Anyone who has read the Diary of a Wimpy Kid series will very much enjoy this book.

Haunted by the loss of his mother and sister, Han Alister journeys south to begin his schooling at Mystwerk House in Oden's Ford. But escaping the Fells doesn't mean danger is far behind. Han is hunted every step of the way by the Bayars, a powerful wizarding family set on reclaiming the amulet Han stole from them. And Mystwerk House has dangers of its own. There, Han meets Crow, a mysterious ... more...