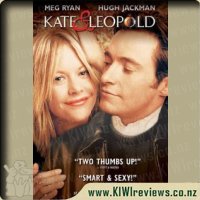 Kate and her actor brother live in N.Y. in the 21st Century. Her ex-boyfriend, Stuart, lives above her apartment. Stuart finds a space near the Brooklyn Bridge where there is a gap in time. He goes back to the 19th Century and takes pictures of the place. Leopold -- a man living in the 1870s -- is puzzled by Stuart's tiny camera, follows him back through the gap, and they both ended up in the present day. Leopold is clueless about his new surroundings. He gets help and insight from Charlie who thinks that Leopold is an actor who is always in character. Leopold is a highly intelligent man and tries his best to learn and even improve the modern conveniences that he encounters.

Kate's ex-boyfriend has discovered a spot on the Brooklyn Bridge where there is a gap in time, taking him back to the 1870's. A man there, Leopold, sees Stuart (the ex) taking photos and follows him into the present. Leopold and Kate naturally fall in love, with some fish out of water antics for Leopold (including a toaster, acting in an ad, a dishwasher and so forth) and discovering your true destiny.

There are quite a few fun moments throughout the film, more than one moments where you can have a good chuckle, one of the most memorable moments for me is when Leopold agrees to act in an ad and he hates the taste of the product and doesn't understand why they want him to pretend that he likes something when he in fact doesn't like it at all. The romance is sweet and I loved the ending, showing that your future may be in the past and the past in your future. Have I got you confused?

Kate and Leopold is a very sweet movie, I guess you could say the perfect flick chick and one I enjoy putting on now and again for some fun fluff.

The film centers around Captain Malcolm Reynolds, a hardened veteran (on the losing side) of a galactic civil war, who now ekes out a living pulling off small crimes and transport-for-hire aboard his ship, Serenity. He leads a small, eclectic crew who are the closest thing he has left to family - squabbling, insubordinate and undyingly loyal.