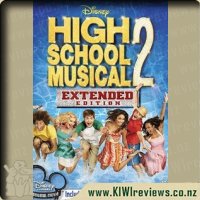 Troy is offered a job at Ryan & Sharpay's country club and ends up landing jobs for Gabriella, Chad, Taylor, Kelsi, Jason, Martha and Zeke. He is then introduced to Sharpay's parents and realizes that Sharpay can land him many opportunities and even a basketball scholarship. Meanwhile, while Troy starts hanging out with the rich folk, Chad is worried that Troy will forget his friends. Gabriella feels as though she is losing Troy to Sharpay. In the end, Troy will have to learn how to think about his scholarship without losing his friends.

We join the kids as they have their summer holiday.

The cast goes through some drama this time around and some changes are made when it comes to the characters, this was good as the writers could have just kept the characters the same. This does alsoo prove that these kids can act, sing, and dance. This movie is a bit more dramatic as it is about loosing yourself, loosing friends etc. but I didn't enjoy it because as much, hard to put my finger on it but I just didn't get as fun a vibe from it.

As for the songs themselves, while I did enjoy the movie they'd have to do a lot better for the next movie, aside from the opener, a baseball game/swing number and the final group song, there's not much to enjoy this time around and I just didn't enjoy it as much. I have watched this more than once but I just can't get into it and so end up skipping forwards to my preferred songs. The location is rather nice, though I do miss the school halls, and there are a few more background characters but not of them really add to the movie.

Overall this is an ok sequel but nothing great.