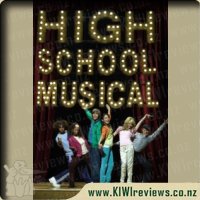 Troy Bolton and Gabriella Montez are two totally different teenagers who meet at a party while singing karaoke on New Year's Eve. One week later Troy goes back to his high school, East High, in New Mexico to find that Gabriella is a new student there. They quickly become close friends and accidentally audition for the school musical. After getting a callback, drama queen Sharpay Evans and her sidekick brother Ryan are furious. Then Chad, Troy's best friend and basketball teammate, and Taylor, Gabriella's new friend on the decathlon team, must find out a way to make Gabriella hate Troy

I have heard that this is a great movie but I have not seen anything about it, a friend has it on DVD so I thought I should finally find out what is so great about it.

My first thought was that this is a modern remake of Grease (there were noticeable similarities in the beginning but after a while there were enough differences to help me to stop comparing the two movies) and I wasn't sure if I would like it but the story is catchy and I soon found myself watching and wondering how they were going to pull it off. I really liked that the actors were average looking, like any other teenagers and weren't incredibly good looking so it made the movie more believable.

The choreography was excellent, with a lot of difficult looking dance moves which was done well. The songs sounded original and some were quite catchy. The movie didn't hold the kids attention for long but I did enjoy it so will be adding this movie to my collection for when I want to sing and pretend I can dance like that.

I know there are sequels to this movie so I will be looking out for them to see if they are worth anything.

When this came out I will still a fan of the Disney channel and I've always enjoyed a good musical, so this was a must see for me.

Troy is a main player on his High School basketball, with his dads help (who is the coach) it is an obsession of his. When on holiday he meets Gabriella, they end up singing a song together and then they both think that is that, but it soon turns out that she is the new girl at school. They end up auditioning for the school play and from there their lives change. Whilst the story line is nothing new it is done fun and the songs are original.

It is fun to watch the special features, there are a couple of extra songs (which are really good and fun) and it's fun to see that Ortega also did some of the choreography in High School Musical as well. The songs are a lot of fun, I think there is only one song that I'm not too fussed about but the rest of the songs have you bop bop bopping along with the music. While this isn't the best movie that I've ever seen it is fun and the music makes up for the plain script.

A fun, clean, musical for the kids, and the parents won't find it too hard to enjoy either.

Before you can say "squeaker, squeak," Kronk is cooking up trouble with the ... more...