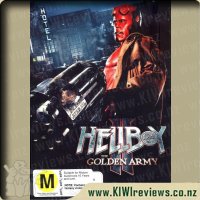 After an ancient truce existing between humankind and the invisible realm of the fantastic is broken, hell on Earth is ready to erupt. A ruthless leader who treads the world above and the one below defies his bloodline and awakens an unstoppable army of creatures. Now, it's up to the planet's toughest, roughest superhero to battle the merciless dictator and his marauders. He may be red. He may be horned. He may be misunderstood. But when you need the job done right, it's time to call in Hellboy (Ron Perlman).

Along with his expanding team in the Bureau for Paranormal Research and Development--pyrokinetic girlfriend Liz (Selma Blair), aquatic empath Abe (Doug Jones) and protoplasmic mystic Johann--the BPRD will travel between the surface strata and the unseen magical one, where creatures of fantasy become corporeal. And Hellboy, a creature of two worlds who's accepted by neither, must choose between the life he knows and an unknown destiny that beckons him.

Having watched the first Hellboy, the second was a must, plus I really like Guillermo del Toro.

You know you're not watching a formulaic comic book film when one of the highlights is a drunken rendition of "Can't Smile Without You" by Hellboy and Abe Sapien. "Hellboy II: The Golden Army" is a more confident than the last movie. The good thing about the script in this movie is that the main focus is on the characters more than the fantastical side of things, which is really nice to see, the comedy flows well and the characters feel real.

The acting is wonderful, Ron Perlman looks as though he was made for this role and does a brilliant job of playing the rough and tough yet softie at heart Hellboy. Everyone else does a really great job and I felt like some were a little underrated and could have gotten a little more screen time. I really like John Hurt and the events with his character tugged at my heartstrings. The special effects are AMAZING! I really like the style and the imagery that fills up the screen, there is so much to see and it is all done so well you feel like it could all be real.

I really enjoyed Hellboy two and I hope the rumours are correct about a third Hellboy movie.

Hugh Jackman stars as Charlie Kenton, a washed-up fighter who lost his chance at a title when 2000-pound, 8-foot-tall steel robots took over the ring. Now nothing but a small-time promoter, Charlie earns just enough money piecing together low-end bots from scrap metal to get from one underground boxing venue to the ... more...