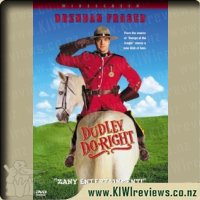 Based on the 60's-era cartoon of the same name. Royal Canadian Mountie Dudley Do-right is busy keeping the peace in his small mountain town when his old rival, Snidely Whiplash, comes up with a plot to buy all the property in town, then start a phony gold rush by seeding the river with nuggets. Can this well-meaning (though completely incompetent) Mountie stop Whiplash's evil plan?

A fun, silly movie to while away a little under and hour and a half.

If you are after a silly movie, with not much for a plot and lots of laughs then this is a movie for you. I have watched it a couple of times, the first it was good as a full of nonsense movie, no real energy required to make sense of anything that goes on in this movie. It's filled with likeable characters and good adult jokes that go over the kids' heads, references to other movies and things. It's one of these films you find yourself laughing more than the kids but the next day you really can't remember much that you saw, so fun, but nothing memorable.

The horse might be in the running as the most memorable character in the film. Even the villain isn't despicable. He's more cartoon-like than evil. Alfred Molina does a nice job as "Snidely Whiplash." Eric Idle and Sarah Jessica Parker are also good in here. Brendan Fraser, playing the title role is good, though having seen him recently in George of the Jungle it wasn't hard to think that this was George had he moved to the city and stayed there, in essence.

This is a very silly movie, but a good family one, the younger kids will enjoy it.