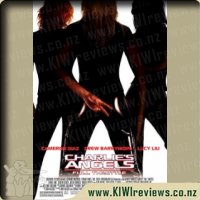 The Angels--Natalie, Dylan, and Alex are back again but this time they're preparing for a strike without even warning as they go undercover to retrieve two missing silver bands. These are no ordinary rings. They contain valuable encrypted information that reveal the new identities of every person in the Federal Witness Protection Program.

When witnesses start turning up dead, only the Angels, using their expertise as masters of disguise, espionage and martial arts can stop the perpetrator, a mysterious "fallen" Angel. Aided by their trusty colleague, Jimmy Bosley, the Angels' adventure begins at a remote Mongolian outpost and ends only after Dylan is forced to face a dark secret from her past--a secret that puts the lives of her two best friends in danger.

They made a sequel. And while, this seems silly and outlandish, you haven
't even heard the plot yet! But I don't really want to waste my time trying to explain the plot, but here is a general overview; as with the first one, it essentially has them fighting to prevent themselves from being exposed, while at the same time, managing to save other people.

Looking at the movie poster, you can see an up-close picture of the three women from behind, wearing some skin-tight spandex material; focus being drawn primarily to Cameron Diaz' posterior, where she is holding out to fingers to signify that it is the sequel. This told me before I had even seen the trailers, that this would be another film, using the attractiveness of its lead characters to push the movie forward, instead of a cohesive plot.

Consisting of many over-the-top action sequences, it is quite weird to see the sort of lengths these women will go through to stop often insignificant things from being disrupted, and despite everything that happens throughout the movie, everything ends in a way that leaves it all wide open for a third film if it does well in the box office. This film does seem to be more of a piss-take, using multiple parodies targeted at various age groups.

The plot in itself, although outlandish, is actually better than its predecessor, and does highlight the potential dangers of keeping records with witness protection schemes. An enjoyable film, that finally manages to provide comedy, as well as the usual bout of sexism.

The Angels are back and I kinda with that they hadn't.

The Angels rescue Marshal Ray Carter from Mongolia but leave without what they presume to be his wedding ring. Later they find out that the ring is one of a coded pair that, once combined, unlocks the data for the location of the entire witness protection programme. The other ring has also been taken from it's holder and the holder murdered. The Angels are charged to bring back the rings but along the way they encounter secrets from the past including a violent old flame from Dylan's youth seeking revenge and an ex-Angel striking out on her own.

The plot is so disjointed, half the time it seems like scenes were just thrown in for the hell of it without any real rhyme nor reasoning behind it, or if there was it was just to see the three main Angels in skimpy outfits again. Characters are dropped in for little reason, Bernie Mac could have done with a lot more scenes but as a result he's not as funny as I've seen him. Theroux is physically impressive but has a terrible accent, Bruce Willis gets about 3 words and everyone else that has a cameo is just kinda thrown in the mix.

Watching one after the other, this is OK but really not necessary.

Score: 8.3
Product reviews for listing 8025: The Spy Who Dumped Me -  Directed by Susanna Fogel