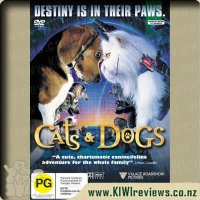 There's a secret war being waged in the homes and neighborhoods of Earth that the humans don't even know about; an eternal struggle between two great armies: the Cats and the Dogs. The film follows a Cat's plan to destroy a new vaccine, that if developed, would destroy all human allergies to Dogs, and the Dogs' efforts to stop the Cats. Specifically, it's the story of a young pup (Tobey Maguire) whose job it is to guard the vaccine. Other dogs include a wise older dog who watches out for him (Susan Sarandon), a large friendly dog (Michael Clarke Duncan), and a small dog who serves as an electronics expert (Joe Pantoliano). Jeff Goldblum is the human scientist that invented the vaccine.

I think it's safe to say that the majority of pet owners have wondered what it would be like if their cat or dog could speak in a language that we could understand. This family film explores the possibility that they do in fact communicate (although still not with humans), and are embroiled in an all-out war, for the ultimate goal of being man's best friend.

This movie I found funny, as it addressed many things a pet owner will come across; hostility between cats and dogs, allergies, and unexplained messes. It provides many hilarious reasons as to why animals act the way that they do, and it had me laughing all the way through.

The concept of pets having secret bases, and committed reconnaissance and espionage is invariably cute, and it's incredibly hard to fault the acting of kittens and puppies. The plot was simple and as with real wars, there were some battles won, and other battles lost. There were weaknesses, and unexpected circumstances that need to be overcome. Overall, it instilled a "you can accomplish anything" vibe, which I find children need to hear more often.

Inevitably, it had a final battle and a feel-good ending as all family movies should. I enjoyed this film immensely, and thinking back on it, and may have to search out the sequel now.

Ever wondered exactly why cats and dogs hate each other so much? You may just find your answer here.

A young puppy accidentally gets mistaken for a great dog secret agent, but with him already in position they are stuck with him. His job is to ensure that the cats don't get their hands on a vaccine that his owners father is making, a vaccine that would make humans no longer allergic to dogs, the cats, naturally, want their paws on it so they can make the whole world allergic to dogs. Whilst some of the special effects come across as looking rather fake they didn't do too bad a job of the animals talking, it doesn't look too unnatural.

The plot itself is nothing amazing but it is entertaining enough for the family, kids love the animals talking and fighting and the older viewers could certainly entertain the idea behind this movie given how much our cats and dogs do indeed fight with each other. The best part of the movie is all the animals, I loved seeing the different breeds of both cats and dogs, seeing which was the genius, the brute, the ninja and so on, the ninja cats really are quite funny.

A fun movie for the family.

Stuart's mother is being over-protective of him, especially when he narrowly escapes injury in a soccer game. His big brother George has also made a new friend, Will, so Stuart is feeing lonely. Stuart rescues a canary, Margalo, from a falcon; she moves in with the Littles. One day, Margalo is nowhere to be found, so Stuart and Snowbell set out across the city to find her while George covers for Stuart (the first time he's had to lie).