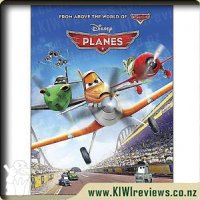 Disney animated comedy spin-off of 'Cars' (2006) following an aircraft who dreams of becoming a racer. Crop dusting plane Dusty (voice of Dane Cook) hopes to become a competitor in high-flying races but is afraid of heights. With the help of US Navy veteran Skipper (Stacy Keach), Dusty trains for the upcoming around-the-world competition and learns to overcome his fear. However, he will have to face a tough opponent in defending champion Ripslinger (Roger Craig Smith) who will do anything to make sure Dusty doesn't win.

A friend of mine got this on DVD for her children and as they were at our house we all settled down to watch it.

I thought this could be a fun family movie as I have seen both of the Cars movies and found them to be rather fun, so knew that a movie based in the same world could be just as fun. The movie follows Dusty who is a crop duster but he is a plane that yearns to be more than just that and thus he begins to train, trying to become good enough to race around the world and along the way attempts to recruit a very experience flyer to teach him.

The story was a fun one, nothing too scary and wasn't anything to bad, but for me, it didn't take me long to loose interest and I found it to simply be a rehash of the Cars movies just set with planes, all the basic formula was the same and as a viewer, I was glad that I hadn't spent any money going to it. My kids all enjoyed it but I haven't had any of them asking after me to watch it again and so I am glad we didn't spen any money on it.

My six year old keeps asking me to see Planes:Fire and Rescue and since I have already seen it and know it will be watched over and over so I promised him I would buy the DVD. Browsing the online shopping for DVDs I noticed that I could buy Planes and Planes:Fire and Rescue for a low enough price I thought why not.

We put it on for a friday night movie and had all six (not all mine) kids watching and wanting to know what would happen next. My four year old asked if he was allowed to watch it again immediately after it finishing. I had no complaints about the movie being scary and I loved the story line although it did follow a lot along the lines of Cars.

I enjoyed the movie as it was good to see how a plane that was not meant for racing managed to use his strengths and do well, never giving up and that is a lesson we can all learn. The graphics and animation was great, you could almost imagine having planes talking and flying around making their own decisions. The music was good and what I did like was that the music wasn't random and was used more like background music and not overpowering.

I would recommend this movie to parents of kids with great imaginations or anyone who loved Cars and since I have already seen Planes:Fire and Rescue I know that will be a hit with the younger generation as well. Hope to see a lot more of this type of movie.

I loved this movie and the children I took with me enjoyed it too. One however would not sit still. I like the fact that we have gone away from cars and trucks to base the movie on the planes and the possibility's and trials that they go through. I love the excitement and suspense on not only on the planes faces but also the people watching.

The story if planes had dreams and could talk is rather believable and enjoyable to the audience. I've noticed that a few of the characters look rather similar to some of the ones in cars, like the forklift, camper van and the truck. This could highly be because it is written etc by the same people but I feel so much for the older planes and the way that they look and are stuck in their ways. I'm a bit of a sucker, not so much for the underdog but for the neglected, old and rusty. I can't wait to see if they bring out a second movie of planes or even possibly something else like trains or boats because I will defiantly be buying the dvd for both my household and as gifts for the nieces and nephews.

I love the movie Cars and Cars 2, they are amongst my favourite animated movies. When I saw Planes advertised as a comedy spin off to Cars I knew I had to see it.

Planes straight away draws you in to Dusty the crop dusting planes with big dreams. He's such a loveable full of life character who is not going to take no as an answer. Telling him he can't do something makes him more determined to do it! He may be a crop duster plane who isn't built for speed but he isn't letting that stop him.

Dusty makes it into a race around the globe and gets to take on the big guns. He has his friends by his side and a lot of determination but is that enough to win when so much is against him. Champion flyer Ripslinger is there to make sure Dusty doesn't win at any cost, no-one is going to stand in his way from winning the title for the 4th year running. A lot of the other competitors are sure a crop duster has no right to be in the race and would rather see Dusty fail. On top of that Dusty also has a little secret he is afraid of heights!

You will have to watch the movie to see if Dusty overcomes it all and wins the race or if he discovered winning isn't as important as have believing in yourself and having others believe in you. If you loved Cars you will love Planes!