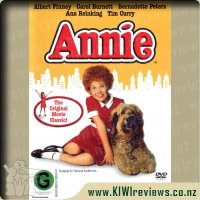 The movie of 'Tomorrow'.

With an all-star cast that includes ALBERT FINNEY, CAROL BURNETT, BERNADETTE PETERS and TIM CURRY, the smash-hit Broadway musical becomes motion picture magic from acclaimed producer RAY STARK and celebrated director JOHN HUSTON. The story of a little girl with nothing but the courage to dream and a man with everything except someone to share it with, ANNIE is big, colourful, with high-spirited performances - an enchanting movie event that will leave a song in your heart and a smile on your face.

Annie is a classic movie, and one of those ones that you should watch at least once, just to say you have seen it.

Annie lines in an orphanage, she gets taken in by a billionaire for a couple of weeks and he ends up falling in love and wants to adopt her, but when she says she can't for hope that her parents are still alive he aims to help her find them, but of course there is trouble on foot to keep this happy ending from happening. Throw in some good musical numbers and you have a good transfer from the stage show to a movie.

I'm sure I've said in another review, but I LOVE Tim Currey and his role in Annie is no different, I have yet to see him in a role that I don't like. Annie is a fun movie, and whilst the script is something to be improved the songs are a lot of fun and it's a good way to while away an afternoon. "Tomorrow" is of course the most well known song from Annie but my favourite is "Little Girls" sung by Carol Burnett.

Annie is a fun movie and a good one for my DVD collection.

In 1981, Colonel Grigoriev of the KGB, disenchanted with the Communist ideal, decides he is going to change the world. Discreetly, he makes contact with Pierre, a French engineer working in Moscow and little by little passes on documents to him - mainly concerning the United States - containing information which would constitute the most important Cold War espionage operation known to date. During a period of two years, French President, ... more...