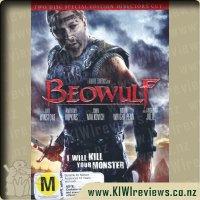 I Will Kill Your Monster

In a legendary time of heroes, the mighty warrior, Beowulf battles the demon, Grendel and incurs the hellish wrath of the beast's ruthlessly seductive mother. Their epic clash forges the timeless legend of Beowulf.

Beowulf is made using the same CGI as Zemeckis' The Polar Express, making it hard to get used to and some of the characters just look odd.

Each character is animated but artistic licence is used. Ray Winstone's voice is the only thing Zemeckis used for his lead character, the body has been slimmed down and his face prettied up. Most recognisable is Anthony Hopkins, playing King Hrothgar, who needs Beowulf to rid him and his people of the terrifying monster Grendel, voiced by Crispin Glover. John Malkovich plays the unreliable Lord Unferth. Hearing and whilst his face looks strange with the animation it actually suits him and to hear him say "bollocks" is worth the price of admission on its own.

Beowulf is wildly silly and there are a few groan worthy moments, the biggest being very Austin Powers and The Simpsons worthy when Beowulf decides to fight Grendel nude, and various goblets and swords and such miraculously block your view of his genitals. Once you have gotten used to the animation style, it tells a decent enough story. The script brings together Beowulf's three battles with Grendel, Grendel's mother and the final dragon in a decent storyline that puts desire, betrayal and lifelong guilt at the centre of Beowulf's psychological makeup.

This isn't a movie that I could enjoy too often, once every couple of years is enough for me, but my husband really enjoyed it so that's one thing I guess.