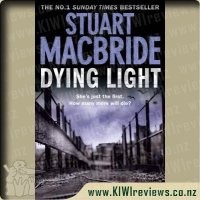 The Number One bestselling detective series from the award-winning Stuart MacBride continues in this second crime thriller. It's summertime in Scotland: the sun is shining, the sky is blue and people are dying...She's just the first. How many more will die

It starts with Rosie Williams, a prostitute, stripped naked and beaten to death down by the docks - the heart of Aberdeen's red light district. For DS Logan McRae it's a bad start to another bad day. Rosie won't be the only one making an unscheduled trip to the morgue. Across the city six people are burning to death in a petrol-soaked squat, the doors and windows screwed shut from the outside. And despite Logan's best efforts, it's not long before another prostitute turns up on the slab...An unputdownable serial killer tale packed with mystery and suspense, as well as Stuart MacBride's distinctive grittiness and dark humour.

I have discovered a new favourite author. I read the first book and loved it so thought that this is going to be easy to read and enjoy and I was right. What I did like is that you don't have to read the books in order as each book covers a different topic but sometimes they do refer to relationships that might have changed in the previous book but you can still follow the story well enough.

The offers made more mistakes and assumptions and sometimes that cost them valuable information or time. The topic of prostitutes were covered in this book, enough details were used that you could follow the story but nothing that would be considered as too much. There was the usual bad language.

You get to follow the relationship between two of the characters but again there is no sex described unless it was in relation to the crimes as if was obvious that prostitutes would be having sex but then it wasn't in great detail. You could image being there and the frustrations of knowing you are close but not knowing when things would happen and having to explain why suspects got away.

Again I would recommend this book and will be reading the rest of the Logan McRae series, I have noticed that there are a few of the books.

Garn once boasted five great kingdoms - until Ithrace was betrayed. Its royal family, the flame-haired Firemanes, was not saved even by its affinity with fire: every one of them was executed by the King of Sandura. Now, four kingdoms remain, out of balance and on the brink of war. But there are whispers that a newborn Ithraci heir may have been smuggled away... Terrified, ... more...