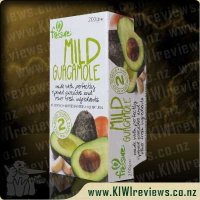 A traditional mild guacamole made with fresh avocado (95%), fresh coriander, fresh onion and other spices. A great dip, the perfect snack.

Try it in salads or as a healthy addition to wraps and sandwiches. In fact, we're told it goes with anything!

Made with 2 fresh avocados.

No Additives - No Preservatives - All Natural

This was by far my favourite flavour out of the range. There are 4 flavours and each have their own subtlety. The winning part for me was the lovely smooth avocado not brown and overripe, not too hard and unspreadable but perfect and easy to use straight out of the two individual packets.
It has a great herb and finely chopped onion taste that leaves an awesome back flavour that we all really loved. I have tried the other flavours in the range but this one was all of our favourites.
I prepared a normal mince nacho meal with dorito chips, sour cream and then dolloped an entire sachet on top! We each had the same meal which used up the mild guac box of two sachets and I must say there was nothing left. I have tried making this before but you usually come across the same problem everyone does. Getting good avos. Why bother with all that hassle when you can just grab this out of the fridge in its excellently designed box that has two subtle pushed in pieces of cardboard at each end to hold the sachets in, don't even bother to peel back the packet, just do what I did and snip the corner off and that way you can pipe the avo on top of your meal without using a teaspoon. If you are new to these flavours I really recommend you give them a try but try this flavour first. you will not regret it.

One of the things I love to discover is a product that has potential... when it comes to food products, that basically means something that can act as a base for a range of other potential dishes... and this is one. It has all the goodness and rich creamy texture of guacamole, but it has a milder flavour which lends itself to 'adjustments' to suit different palates.

For example, most of my family prefer softer, subtle flavours so adding a few chopped fresh herbs as all that was needed - some basil and flat leaf parsley, and a smattering of chives... while I cracked open the other sachet and added the same, plus extra garlic, some cayenne pepper, and some fried diced shallots and ate it with crispy garlic and cheese tortilla chips made from Farrah Spinach wrapsome grated cheddar, cut into small triangles then grilled to a golden crispness... bliss!

Unfortunately, thus ended the tests for this one, because of the four variants we received, it was the one that was most appreciated by the entire family, and as such was very quickly eaten up. Still... that's a pretty promising sign in this house, where there are a wide range of food preferences with very little overlap. This is certainly one I plan to keep on hand, because it's great as a dip to go with the meat and salads in BBQ weather, while also still being great for tweaking as a snack, or as part of a meal in the cooler months too.

Overall, a great product that will surely please... too mild for you? Just spice it up a bit!

When the packet says that there are no preservatives, they spread no lies (pun not intended), after opening the packet, I noticed that the stuff started going brown within the next couple of days or so. The flavour of this guacamole was really quite nice, it had a bit of spice, and there was a hint of garlic in there as well, or at least as far as I could detect. The texture was also great as well, so that made this stuff even more enjoyable for me. I actually first tried this dip with bread instead of chips, and it was actually REALLY nice! I think that this dip also makes a great spread as well.

I think that this guacamole is a great thing to have in the kitchen, as it's level of versatility means that it is an awesome item to have on the shelf. I found a little footnote on the box, and it said to use the dip within 6 HOURS, so if you have no need to use this dip within that time, then I would recommend vac-packing the container, and by vac-packing I mean putting it in a zip-lock bag and suck all the air out, not using an actual vac-packing machine; This should prevent the avocado from oxidizing.

I found that the parts that went slightly brown gave me a bit of a metallic taste in my mouth, which wasn't that enjoyable, so I now HIGHLY recommend making sure that you don't let this stuff oxidize. I don't know what the price for this guacamole is, so I'll just give it a default 10/10, same with the "Value for money" aspect as well. There really isn't much else to say about this stuff, so I'll cut it lose now, but I really hope you enjoy this dip as well.

Of all the Fressure Guacamole spreads, the mild was by far my most favourite. It has that unmistakable flavour of avocado, with onion and other spices and herbs that make up a nice but mild guacamole. I love that this is additive free, and preservative free and that is obvious by the way the spread goes slightly brown after an hour opened. Not that there is really much left of it by the time the packet has been opened.

I could probably just eat this with a spoon it is so nice. But I saved myself from that simply by adding this to dinner the other night. We had burritos, with spiced mince, grated cheese, diced tomato and wraps. I added a coating of the guacamole with the sour cream on each wrap. My husband who is not into avocado said he enjoyed the flavour. I couldn't get enough of it, the cheese and sour cream just added to the whole flavour. It was great.

My eldest daughter wouldn't touch the green stuff, but my youngest daughter once she was encouraged to try it seemed to enjoy it. I have fussy kids at the best of times, so this was a pretty good run for the product. This one is definitely on my "buy again" list. Though I have introduced all of the spreads to others through a shared lunch and I can safely say that the products were very well received.

I love guacamole but whenever I go to make guacamole I can't find avocados that are ripe enough and then there are other ingredients that I would have to buy too. The idea of being able to buy a fresh guacamole is really appealing especially when avocados are out of season and over priced. It is also very convenient to pick up from the supermarket on your way to an impromptu picnic or party.

For a weekend lunch for me and my girls I made a platter of raw vegetables and rice crackers with the Fressure Foods Mild Guacamole and placed it in the middle of the table. As we were all eating from the with our fingers I had minimal dishes, only the chopping board, knife and serving dish. I was really impressed with how many vegetables my girls ate I also ate a much healthier lunch than I normally would. I only put out one pouch of guacamole to start with unsure of how popular it would be. I soon realised that the second pouch would be needed too as Miss 3.5 and I went through it really fast. Miss 5 is very fussy with her vegetables so I wasn't surprised that the guacamole wasn't for her.

I found the guacamole to be very mild. I was surprised to see there was no tomato in it as when I have made it the two main ingredients have been avocado and tomato. I could taste the garlic and onion (perhaps this is why Miss 5 didn't like it. There were lumps of avocado in it but the majority of it was smooth. To me this is a good base to which you can add your own ingredients or leave bland for the kids. This was Miss 3.5's favourite from the Fressure Foods range so will be buying it for her again.