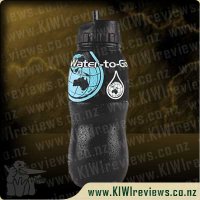 Disclosure StatementFULL DISCLOSURE: A number of units of this product have, at some time, been supplied to KIWIreviews by the company for the purposes of unbiased, independent reviews. No fee was accepted by KIWIreviews or the reviewers themselves - these are genuine, unpaid consumer reviews.
Available:
via Online Store and Tollfree phone number

The secret is a high-tech nano filter that neutralises or blocks the passage of harmful chemicals and pathogens. This technology, specifically developed for the NASA space programme, has been proven to filter over 99.9% of all contaminants in the water.*

Water To Go filters have three filtering mechanisms:
•  Mechanical - the very small pore size won't let anything larger than 2 nanometres through;
•  Electrostatic adsorption - protozoa, bacteria, viruses, cysts all get attracted to and then adhere to the filter and can't then go anywhere else;
•  Carbon - in the form of non-glued carbon particles dispersed throughout the filter which removes taste, smell and some heavy metals.

* Will not desalinate sea water.

Shower Stool With Back Support
Rating: 8.8

Even seeing this in action at the homeshow didn't have me totally convinced - after all, despite the convincing set up: a big bowl of foul water from the duck pond outside sitting in front of the salesman, who then poured clear water out of the bottle... who's to say the filthy water actually ever saw the inside of the bottle?! So, I had to do it myself before I was going to be convinced... and after exhaustive testing, I now am.

I decided the best time to really give this a go, was after I had prepared a small paddling pool of the most foul water imaginable in a "civilised" country... it had to be filthy with dirt, contaminated with biowaste (in this case a collection of dead birds thanks to our cats) plus a generous helping of mozzie larvae and some rotten fruit tossed in for good measure. Left to stew out in the sun for a week or so to get really rotten... and instead of a taste-test, I had a water purity kit courtesy of the local pool company.

Pouring the water into the bottle was perhaps one of the most disgusting things I have ever had to do as part of a product test - the smell was enough to make me gag, and I had to wear one of those filter masks with a bit of mentholated chest rub smeared on it just to get the bottle filled. Then, making sure I had removed the protective cover from the filter, I sealed it up and headed into the garage where the water testing kit had been set up... there, I could finally breathe again. I also brought a small sample of the 'raw' water along as well, as a control to compare the test results.

Testing the unfiltered water gave the expected results... ranging from bordering-on-toxic to seriously-unpleasant across the range of tests, which check things like pH, biomatter content, presence of bacteria and protozoa, etc. Basically, this was "third-world undeveloped nation" water, and it really struck me how many people on the planet have something this unhealthy as their only source of hydration. I'm surprised they survive at all! You couldn't see through it, it was an ugly grey/brown in colour and it MOVED!

However, after running the water through the filter on the bottle, the resulting water was almost totally transparent, had a pH almost neutral, passed the biomatter, bacteria and protozoa tests flawlessly (within the tolerances of the tests) and had no detectable smell what so ever. Due to a recent ailment, I was advised not to risk drinking it even with such a glowing set of results. Instead, I used some old highschool chemistry knowledge, and dumped the 'potentially clean' water into a beaker and evaporated off all the water to see what residues HAD made it through... and I was only mildly surprised to find that there was less residue than remained after evaporating off an equal amount of water straight out of the tap!

Having done a few years as a Cub and Scout Leader, and having been on more than a few hikes and camps in my time, I can see a LOT of situations where this bottle would be a life-saver. Even if you are trapped up in the ice, drinking ice and snow can prove hazardous, if for no other reason than the sub-zero temperatures cause internal burns. Yes, burns can come from extreme cold as well as heat - a burn is caused by energy, in the form of heat, passing through flesh... the direction of travel isn't actually important! However, scooping this bottle full of snow and tucking the bottle under an armpit will be uncomfortable, but it will provide you with a great source of clean, potable water no matter the snow's contents... even the dreaded 'tangy yellow snow' if you really, REALLY must!

Overall, this may seem like the most overpriced sipper bottle out there, but if you are an outdoors type - hunter, hiker, camper, wanderer, or just a regular Joe who's smart enough to know that you should plan for the unexpected in life, then you'll soon find this little piece of filtration technology is a real boon. I have already bought a 2-pack of spare filters (since I really abused the one that came with the bottle by running the tests 20 times to be sure of the results) and this bottle resides in my "Civil Defence Emergency" backpack. I plan to buy 4 or 5 more as and when I can, so that I have one in each of my family members' kits as well, plus a couple in the car. It could be the difference between walking out of a nasty situation, or being carried out.

Shine surfaces to a sparkling gleam with the ADMAN Microfibre Super Mop! It picks up dust and dirt like a magnet. This mop's bendy microfibre cleaning head is multi-angled, so it can effortlessly tackle the awkward nooks and crannies that other mops and dusters can't.

Use with or without cleaning chemicals! Use on tiles, vinyl, hardwood and wood laminate floors or any hard surface! It works wonders on floors, walls, stairs - anywhere ... more...