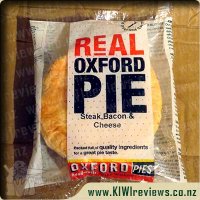 I liked the taste of this pie, which is always a good start, but I did begin to soon wonder where this magical cheese like substance that was promised to me on the outside of the wrapper, I think it had left the building and wasn't going to come back. Steak is good, and combined with some bacon the flavour is really good, and should be done more often, the lack of cheese did disappoint me as cheese goes well with everything, EVERYTHING.

So a great tasting pie, I liked everything that was going on with it, more cheese would have been the key to getting a higher review score from me. The bacon and steak used seemed like good bits of meat, better then some other pies I have come across. Check out this pie if the combination of flavours appeals to you, you can't really go wrong with it.

My Dad says that a little bit of vitamin bacon can make any meal better, so to ad it to something that is already a Kiwi favourite, it makes for one AWESOME pie! The name sounded appealing to me from the start, and now it is a flavour that I do not hesitate to have. The cheese wasn't easily detectable, but the steak and bacon were awesome. I think that this pie could do with a little more cheese, but as it is, I still think it's awesome.

The steak was well done, it wasn't chewy or stringy, and tasted awesome! The bacon was also excellent, it had a great flavour, wasn't too crisp and was cooked to perfection. The pastry was great, it had some colour to it and since colour is flavour I would say that while it might not be healthy, it wasn't dry and bland. The filling were, overall, and awesome combo, so I would like to thank whoever came up with that flavour idea!

I think that $3.50 give or take is a good price, it isn't a total rip-off, but it isn't so cheap that you would have any reason to be suspicious. Having a steak and cheese pie was great before, but the added bacon in this version was such a great taste that even today I still have them, and still love them. I would recommend it for any pie-lover, as this is is something you have GOT to try!

How could someone take my favourite pie and make it even better? Well, it seems the answer to that is "cram in a heapin' helpin' of Vitamin Bacon!" - which is just what these smart cookies did.

Sharing this pie with the family, by making a family favourite meal of Pea Pie Pud Plus... I used four of the review pies and chopped them into quarters so that each of the diners got to try them all... including a 5yr old Mr Fussy Eater. I knew he was going to be the real testing point, because if he'll eat it, it's got to be good... very good.

As expected, the pastry was amazing and like all the Oxford pies so far, handled microwaving with dignity, retaining it's integrity... and fillings. The secret I found, after exhaustive testing on a box of 'factory seconds' (which, I should add are still pretty amazing despite some minor 'construction flaws' and filling-leakages) is to take your frozen pie, nuke it at 50% for 4:30-6:00 depending on your box's power rating, leave it to sit for 1 minute, then give it 90 seconds at full blast before serving. (Add 15 seconds to the last bit if, like me, you chose to slap a slice of cheddar on top for added Vitamin Cheese.)

Overall, when I see this pie in the warmers, it will be my first choice, and I am willing to toss my dignity away and growl in a decidedly feral manner at anyone who tries to prevent me from getting it.

As the final 'Seal of Quality Yumminess" I am happy to report that even Little Mr Fussy enjoyed it, saying afterwards that he found it "...very tasty, thank you."

We shared this pie the other night as part of our dinner. I cut this in half between my husband and myself. The pastry cut really well and didn't lose it's shape. My husband had his half and was really impressed with the pie. He felt there was a good amount of meat in the pie with the addition of the bacon pieces.

When he had finished his half he asked if there was anymore. He was very upset when he found I had eaten the other half. He said that this was a pie he would have bought for lunch given the opportunity.

From my point of view, I did find the filling to be a bit saltier compared to the normal steak and cheese pie. I didn't really see a lot of cheese in the mix. But the bacon was very evident which was good. Personally while this pie did offer a point of difference, I don't think it was enough to sway me away from straight steak and cheese.

That said, my husband is keen to try this again. I suspect that I will pick one up next time it's a pie day at our house, just for him. I'll even be kind enough to let him have the whole thing next time.

When I was given a bag of Oxford Pies to review the steak, bacon and cheese one really appealed to me. I love steak and cheese pies but had never thought of adding bacon to it bacon is a big hit in my family so I predicted this would be too. Only my five year old was around when I tried it and she was keen to try it. I only gave her half the pie so I was able to try it too and her share disappeared quickly.

The first thing I noticed about the pie was that there was a lot of bacon in it. I thought this was great but unfortunately since bacon is so salty it made the pie too salty for me. For others that add salt to everything this is probably the ideal pie. This was the one pie I wish my husband had tried as he is one of those people. He would have surely loved this.

I was very unsure about this pie, yes, I love me some bacon, but... I never eat steak pies because I invariably end up with big, chewy chunks with bit of fat on it. Sometimes it's a good thing having to review something, you can find something is nice when you thought you wouldn't like it.

I shared this with my husband, something that I was pleased about at first and later regretted slightly.

The chunks of meat were lovely and tender and there were some lovely big chunks of bacon. -drool- The gravy was really nice, and overall I really enjoyed this pie. That makes hubby happy cause it means more Steak, Bacon and Cheese pies in the freezer.

This was a nice pie and a pleasant surprise for me. You could really taste the bacon which is a huge plus and there was the perfect amount of cheese mixed through it. I would happily eat this pie again.

This blend of Kawakawa, Aonori Sea Lettuce, Wakame and Karengo give an authentic natural taste that is uniquely New Zealand.