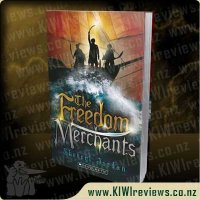 A riveting tale of piracy and slavery set in the early 1600s in Ireland and Northern Africa.

Twenty-five years ago, young Liam's small fishing village on the Irish Coast was raided and its population decimated by brutal corsair pirates from the Barbary Coast who killed, plundered, and took a number of his people back to Northern Africa as slaves to Muslim masters.

And now a pirate ship has been wrecked in Liam's bay, and survivors are struggling ashore

As soon as I saw this novel, I had to have it. Sherryl Jordan is one of my all time favourite authors for young adults. My first introduction to her work was Rocco, but I have read many other novels over the years. I find that despite my getting older, she is able to weave a story that draws me in at any age.

This novel is about an Irish village, and a pirate invasion or three. The village has been visited several times over the course of 25ish years, with losses on both sides. Mostly though, the book is about the brave Freedom Merchants. Monks who travelled dangerous waters, trying to help recover stolen people who had been taken for slaves.

Our main character Liam is the youngest son of a large Irish family. He is a dreamer, taken to the stories of the travelling bards, healing wounded predatory animals. Like all of Jordan's heroes, he is an ordinary boy. But he takes on a huge adventure to do extraordinary things.

I was really amazed at how quickly the book grabbed me. I had just finished one book on Friday night and I thought "I'll just read 10 or so pages of this before bed". Well, I should never do that with a Jordan novel, because 50 or so pages later it was midnight! The next day, I casually picked the book back up and lost another few hours without realising it. It was an easy read, with lots of action. Not too much gore, though bad things still happened. I'd recommend this to anyone who would like to know more about the Barbary Coast pirates of the 1600s. Anyone who has previously enjoyed Jordan's work would probably like this too.

The blurb on the back of this book and what you read in the description above are two different things and both give me different thoughts as to what this book is exactly about. Above has me thinking it is a tale about a young boy who's home is attacked by pirates and what the aftermath is that occurs, the blurb on the back of the book itself tells me that this is a story of a young boy who's brother is taken by pirates and he begins a journey to rescue his brother. Whilst both of these blurbs are right... I don't think either fit the actual book well.

Young Liam lives in a tiny little village in Ireland. One night the bell tolls and they fear either a shipwreck or a pirate attack, the events that follow affect the village in more ways than they expect and has a bigger effect than expected upon Liam. Later, when his brother and others are taken by pirates, the events of that fateful night ends up helping Liam in his quest and changing his life.

Because of what I expected the book to be about, it took a little while to really get into the book as I kept wondering when the stuff in the blurb on the back was going to happen. After a while it didn't matter, once I really got into the book, Liam and his life. The best way to describe the first 1/3 of the book was that it was like a big back story, without it you couldn't have had the book go in the direction that it did but the blurb on the book felt to me a bit misleading.

The characters themselves are nothing amazing but they are believable and it is easy to imagine that a young lad like Liam really did exist and wish to reunite his family. There is enough description in this book for you to really get a good picture of slave life and the world that they are in without being hideous.

Took me one day to read it and I did have to push myself quite a bit to read it at first as it was difficult to get into when you are wanting the action to start happening, but it was still a good read.

The Great Big Book of Dinosaurs explores the world of these remarkable reptiles, and how scientists, called ... more...