« Out of Time review 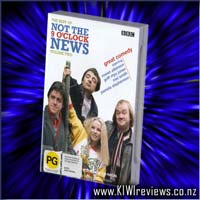 Disclosure StatementFULL DISCLOSURE: A number of units of this product have, at some time, been supplied to KIWIreviews by the company for the purposes of unbiased, independent reviews. No fee was accepted by KIWIreviews or the reviewers themselves - these are genuine, unpaid consumer reviews.
Available:
4th November 2004

Sketches flow with the sharpest wit. News clippings and archive material are mixed with monologues and music.

These four folks banded together in the mid-70's to form a new era of comedy, exploring new areas of wit and satire, with some blatant, almost American humour to add a bit of variety and spice to the otherwise quite dry humour of our Colonial Motherland.

Overall, there is some great laughs in here, and if you like British wit, or jokes that don't just slap you with a fish and start laughing, this could be well worth investigating. I was quite entertained, and it has earned it's rightful place between the Billy Connolly and the the full Monty Python Collection.

In the second installment of the award winning psycho-sexual horror series, explore sanity and real-life horrors in the macabre Briarcliff insane asylum. Set in 1964, American Horror Story - Asylum takes viewers into a Church-run haven for the criminally insane, ruled with an iron fist by Sister ... more...