What a Girl Wants review 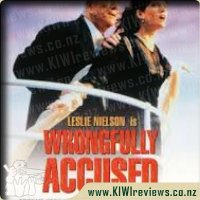 Violinist Ryan Harrison romances the wife of his benefactor, a man murdered by mercenaries. Naturally, Ryan gets blamed. Headed for Death Row, he's on a bus involved in a train accident and escapes in order to locate the real killer - a one-armed, one-legged, one-eyed man.

It stars Leslie Nielsen. what more do you need to know? It's true, Nielsen has built a career out of movies like this. He plays Ryan Harrison, the dashing, although somewhat clueless hero who somehow romances a woman half his age, tracks down a 1-armed, 1-legged, 1-eyed man, and saves a UN Member. He does so through trial and error, questionable flashbacks, smart-alec quips and oddly phrased metaphors. And somehow does it in what seems to be 2 days! In the good tradition of the parody, nothing is sacred to this movie.

Although it is mostly a spoof of The Fugitive, every movie gets the blade here. Braveheart, Titanic, Mission Impossible, Field of Dreams, it all gets the Nielsen treatment. And just movies, but pop culture too! Car alarms, ER, bras, basketball commentary, and Alfred Hitchcock all get their dues. Even the adorable puppet Lamb-chop can be heard chanting 'Riot, riot, riot!' in a scene.

Simply put, any Leslie Nielsen fan will love this. If you hated his previous movies, you won't like this one. It's a rehash of the classic parody formula, a formula that has withstood the test and still stands up. And of course the clueless Nielsen doesn't fail to disappoint. Running from a model air-plane, wearing a meat factory coat to impersonate a doctor, using a long wooden stick to deactivate his bear-trap car alarm, and playing a violin with his teeth...He does it all! Leslie Nielsen is without a clue, without a hope, and he's been Wrongfully Accused!

Continuously unsuccessful at keeping these masters - from T. rex to Napoleon - the Minions find themselves without someone to serve and fall into a deep depression. But one Minion named Kevin has a plan, ... more...