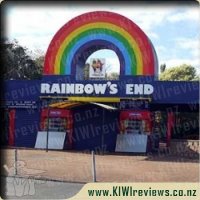 Rainbow's End first opened in December 1982. The amount of attractions has grown over the years. Initially the park opened with Bumper Boats, Mini Golf, Can Am Cars, Mirage Cars and video games. In 1983, Cinema 180, the Pirate Ship, the Maze and the Indoor Games Area were introduced.

The popular Log Flume was introduced in 1984 along with the Indoor Dodgems and Garden House Cafe. Then in 1985 the Kiddies Cars, Space Shuttle Zim Zam Zoo Children's Playground and Staff Amenities were added.

The Coca-Cola Corkscrew Roller Coast was introduced in 1986 and was an absolute crowd puller during this year. Rainbow's End added the Motion Master in 1992 and the following year the Family Karts were brought in and utilised the Mirage Cars racetrack.

In December 1995 another major ride was added. This was the Gold Rush, a themed ride in which 4 people sit in a mine cart which then takes them on a thrilling journey through an authentic abandoned gold mine. This ride was designed and built by our own people. A tremendous effort and a fantastic achievement.

In 1996 our Car Wash Convoy was purchased. This replaced the Caterpillar and is an attraction for the younger visitors to our Park. In December 1997 our new family play area was built on the site of the old maze. This area includes our two new rides, the Dragon Flight and Carousel. The area is themed inside a Castle and it proves to be popular for the under 8 year olds.Three more attractions followed in 1997 introducing Castle Land, the Carousel and the Dragon's Flight. These rides catered for the Under 5 children and were very popular with the under 5 year olds.
Construction commenced in June 2001 on a $2.5 million "free fall" tower. At 54 metres in height this added another major "white knuckle" attraction. Supplied by a Swiss company the tower was assembled by a team of our own engineers, on time for opening weekend 26th October 2001. The tower has capacity for three further tracks to be installed at some time in the future.

The Power Surge & Jumpin' Star attractions arrived in the country from Italy on Monday 13th December 2004. The foundation work had already been completed by our maintenance and engineering personnel prior to their arrival. Both rides took approximately one week to construct & commission once they arrived and were ready for the opening day on Saturday 18th December 2004.

Since then we have added the adrenalin pumping INVADER which opened in December 2009; it has been a huge success proving popular with all ages. Coming from Italy, it arrived in six 40 ft containers and travelled from the Ports of Auckland in Convoy to Rainbow's End!

Development in the park is ongoing with three new eateries introduced and a brand new stage built in December 2010.

There are many exciting plans being developed for the near future so watch this space!

Open Monday to Friday 10 am to 5pm except Christmas Day

We went here two weekends ago I took an eight year old a five year old and a 16 month old I hadn't been since there big revamp of the rainbow castle which is designed for kids eight and under and as when ever we go the price you pay to get in leaves me bitter before we even get in so I need to be impressed to leave smiling ...

First off I have to say the new indoor playground is awesome it was a really busy day but all three children with me had a blast in there. It was hard to keep track of the older two as it was so busy and hard to see where they were but we told them where we were and made it clear to them to stay indoors and to come back to allocated place along with catching a glimpse of them every now and then as they made there way through various tunnels, climbing nets slides etc so overall it worked well. The 16 month old loved the play pen with the giant plastic blocks and had a ball was great to see rainbows end accommodating for babies now. The lines were long for the other rides we went on (some almost an hours wait) but throughout the day we got to go on nearly every ride at least once so overall was reasonable and kids were happy .

We took our own food as after paying the price to get in I didn't want to buy overpriced food as well but rainbows end has no qualms with allowing own food to be brought in so that's another plus and choice really. Overall although expensive kids love this place and it does provide a memorable day . I think choice of day time etc when you go plays a big part of the experience you have effecting waiting times and price, as weekend and school holiday pricing can be different for some things. Additions to the castle land have also enhanced the overall experience as it is a more well rounded experience for all ages with a variety of different rides etc. Just be aware of extra costs for games, food etc . Is a great time for a special treat or a once a year thing or reward but would also gladly take toddlers there for coffee groups etc as pricing if not school holidays for just indoor playground is much more reasonable and similar to other indoor playground facilities.

Rainbow's End is one of those places that is a great day out for the whole family. There are rides and attractions for everyone so you are sure to find something to do. Even an area for the preschoolers with rides and games specifically designed for the littlies. There are the big rides for the adrenaline rush thrill seekers or more placid rides for people like me.

We have been there several times over the years and have our favourite rides. The ultimate ride is the log flume and we will have several turns on that during the day. Try as she might my daughter is never going to get me on the rollercoaster as even watching it gets me a little green around the gills, so I leave that one to her and her dad. Oll's favourite thing is the go carts although he always moans how they slow you down with their controls if you go to fast.

The annoying thing is the waiting times, in peak times during summer you can spend most of your day waiting in queues especially during the school holidays which can be extremely frustrating. We have found the best time to go is in the Winter months and during the school term that way it is less busy and the wait times are not so bad. We also go first thing in the morning and stay for the whole day so that you really get your moneys worth as it is quite expensive for the whole family to get in.

We went there once for my daughters 6th Birthday on your birthday as long as you are going with other paying people you get in free. You also get a birthday badge and your name gets called out in the Pavillion Area during the lunch time show. My daughter found this a real buzz. The show is pretty cool too with different acts on different days from music and dancing to magic shows so is worth a watch while you eat your lunch.

Speaking of lunch I recommend taking a family picnic as the food places are quite expensive and again during peak times you can stand around waiting for food for long periods of time. I find picnics better anyway because you can take whatever you want and it is generally healthier for the kids.

Meet Sarah, seven years old, with big eyes and a green hat who lives with her quacky, flappy best friend, Duck. en path and a red front door. Together they embark on simple but exciting adventures, exploring their world both near and far in their own wobbly and imaginative way - trying to reach a rainbow, pretending to be a penguin or helping an umbrella to stay dry! Every step of the way they are guided by The Narrator who offers helpful ... more...