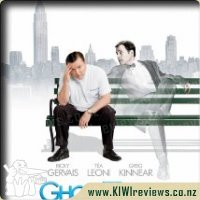 Bertram Pincus (Ricky Gervais) is a man whose people skills leave much to be desired. When Pincus dies unexpectedly, but is miraculously revived after seven minutes, he wakes up to discover that he now has the annoying ability to see ghosts. Even worse, they all want something from him, particularly Frank Herlihy (Greg Kinnear), who pesters him into breaking up the impending marriage of his widow Gwen (Tea Leoni).

Bertram Pincus is a dentist who hates dealing with people, thus being a dentist is for him, a great job, since you don't really have to listen to the people. He ends up going into hospital for a routine colonoscopy only to die and be revived whilst undergoing the procedure. Thus one of the most antisocial people ends up being able to see ghosts, whom he cannot get away from.

There is some great laughs provided by the hospital before and after Bertram's stay in hospital and plenty with him and his interactions with the ghosts. The only thing that I felt was a let down was that they had a couple of ghosts feature in the movie but not all of them had us seeing their message being passed on (which I would have liked).

I really did enjoy this movie as what is funnier than a highly antisocial man forced into social circumstances. Ricky Gervais does a great job as Bertram.

Equally economical and creative with the truth, masters of the dark art of manipulation, Charles Prentiss (Stephen Fry) and Martin McCabe (John Bird) return for a second series of this satirical look at the machinations of the PR industry.

Whether it's rebranding the House of Lords as a new reality TV programme, 'The House', or softening up public opinion for an impending bid for British Airways by Osama Bin ... more...