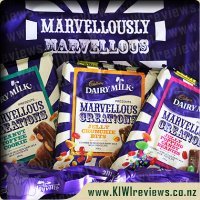 Have you found a Golden Key to Joyville yet?

The Marvellous Creations mixing room is a truly magnificent place, it's where all the chocolatey magic happens. An array of fantastic ingredients catapult through the air in anti-gravity and the Joyville mixologists ride the walls on magnetic skates.

Only a few get to witness this wondrous sight, but here's your chance to see the inner workings of the Cadbury factory with your own eyes. Our chocolatiers have secreted away six golden keys to the mixing room inside blocks of Marvellous Creations for you to find.

Find a golden key and you'll be one of the lucky six to win a trip to the Cadbury factory in Dunedin to invent a Marvellous Creation of your own, plus an instant $10,001 cash prize. You'll choose from the ingredients in the mixing room and set it all in Cadbury Dairy Milk chocolate. So what would you add? Toffee? Caramel? Skyrockets?

I wasn't so keen on the peanut toffee (which I thought I'd love as I love any chocolate with nuts in it) or the jelly crunchie bits (I'm not a big fan of the jelly bits that get stuck in your teeth!), but this is possibly more because I had tried the popping candy one first and they had a lot to live up to!

The price is the only downfall of this product. Last week in the supermarket the standard blocks of chocolate were on special - two blocks for $5 yet one block of the marvellous creations was $5.99 - yet in the small chocolate bars all of the cadbury bars were only $1.00. Why are the small bars the same price yet the big block of marvelous creations is more expensive than the standard blocks of chocolate?

Overall I would recommend this product, the popping candy one in particular - but keep an eye out for it to be on special to really make it worthwhile!

Chocolate: you either love it or you hate it...I love it lol And when the adverts for Cadburys marvellous creationz first started appearing on our TV screens, my kids would constantly call me to come watch. Lets face it the marvellous creations ads are pretty marvellous. Exciting, visually appealing, and as such easily suck you in to wanting to try the chocolate.

Cadbury possibly released their marvellous creations brands of chocolate at the perfect time as they had made their blocks smaller and changed an ingredient, in turn dissapointing a lot of people. Since their release we have tried all the marvellous creatioms flavours. They are a good sized block, packed full of yummy lollies and other bits and pieces. In fact I was very surprised with how jam-packed each piece is. Cadbury has not skimped on the fillings.

The packaging is also visually appealing and eye-catching. And I do like that the packets are resealable too, keeping the chocolate fresher for longer. The price is a little higher than the standard blocks, which is a bit of a shame but for how much you get in a block you can't really complain. And we did not come across a single block that we did not like either.

To say that I am a huge fan of chocolate is an understatement...in actual fact I am a chocoholic....my dependency goes all the way back to childhood. I had friends telling me about the new chocolate by Cadbury and talking about the different flavours which sounded very interesting....so on my next visit to the supermarket I looked for them and there was none on the shelf down the lollie aisle, and where it should have been it said 'out of stock'!! I was disappointed and hadn't even tried the chocolate yet!!

Anyway on my way around the supermarket I saw a display at the end of the aisle displaying the new chocolate and it was on special so double bonus...there was three different flavours so of course I bought all three!! A bar of the Jelly & Crunchy Bits, Jelly Popping Candy & Beanies, and finally a bar of the Peanut Toffee Cookie.

I start with the popping candy bar because I love popping candy!! I‚ ™m letting it dissolve a bit, have a little chew and heeeeyyyy ‚" it‚ ™s POPPING! The popping sensation is so weird! It‚ ™s making my ears feel a bit odd actually....the popping candy doesn't have much of a flavour but the sensation is really kinda cool....and before I know it half the bar is gone that is just that good.

I tried the jelly and crunchy bits bar next and I loved the chewy chunks of jelly which I would describe like eating a jelly baby, and plenty of little crunchy pieces. The jelly is a bit too sickly sweet if you tend to eat it a lot of it at once, but I think lovers of lollies will like it.

Lastly I try the toffee peanut bar and WOW I taste chocolate then toffee then peanuts and biscuits bits. It‚ ™s like an orgasm in a foil wrapper!!! This is so good! Smooth Cadbury dairy milk encasing crunchy bits of peanuts and toffee and biscuit bits. This bar of chocolate is so good I can see it being on the top of my shopping list literally forever!

Cadbury, once again you have captured my heart and my tastebuds. Please don't let Marvellous Creations be a limited edition item. I want to eat it forever and ever, and ever!

Cadbury's Marvellous Creations remind me of a Willy Wonka chocolate experiment. There are three flavours in the range, so far. But I suspect that more will come out if they prove to be popular. I tried all three today.

First up was the Jelly Popping Candy and Beanies flavour. I shared a bar of this with my eldest daughter. Her immediate reaction was "What is popping in my mouth?" she then sat very thoughtfully. After a while she said to me again, "there is popping happening in my mouth". I'm not sure if she enjoyed it or if the sensation just stopped her in her tracks. Asking her didn't get me anywhere as she was distracted.

I remember loving popping candy when I was little. The Christmas Elf bars they put out with popping candy in them are one of my favourites. I found this bar though, to be a bit disappointing in the pop! There just wasn't enough in each piece to fizz my tongue. The jellies were nice, but the beanies were kinda hidden. There was the candy crunch but no flavour difference to them.

The second one we tried was the Jelly and Crunchie Bits one. So this had jellies in it and what looks like hokey pokey, though the wrapper doesn't really say. I liked this one, again nothing too special, but it reminded me of another favourite of mine - Black Forest.

Lastly I tried the peanut toffee cookie. The cookie bits are surprisingly big and not too hard, a bit like shortbread. The toffee flavour and hard crunchy pieces are nice. The peanuts added to it. I would say this was my favourite flavour out of the lot. Because it has whole nuts in it, none of my family will want it (they hate the texture of whole nuts). So all the more for me!

A last comment would be on the irregular shape of the chocolate blocks. While it looks interesting and gives the chocolate another point of difference, it is very annoying. I want to be able to break my chocolate up easily. As a mother, I want my chocolate to break up in fair portions too. Just something to think about.

Well I've seen the ads on tv for so long now always looking at it going OMG so yum, I should try that. With all the goodness packed inside who wouldn't. While out shopping hubby decided to put some in the trolley so we have now tried the jelly popping candy beanies one. Its SO good.

Now while it has that same taste of dairy milk chocolate that Cadbury puts out and taste so good there are so many surprises inside, like the beanies, so good, there are also pebbles hiding in there too and the best thing I found when I bit into a piece was the popping candy. Love popping candy and it gave me a flash back to when I was younger eating the popping candy with lollypops, now its in chocolate WOW yum.

Now I haven't tried the other flavours but this one has hit the spot for me for sure. I recommend this to all candy loving people. With its funny shape for the break bits I love, its not just straight lines with 4 pieces in a row, it all over the place which makes it more awesome.

My daughter loves this chocolate I think it is a chocolate that any kid could easily love with jelly beanies, pebbles, and popping candy all wrapped in chocolate!! Casidy goes crazy for this being a big fan of all things sweet and not generally being aloud a lot of sweet stuff!!

I personally can not stand popping candy as when I was younger and tried popping candy for the first time when it all started popping in my mouth my mean big sister told me that that was all my teeth cracking from eating too many lollies so I've never liked popping candy since. If it didn't have the popping candy I would probably like it though as I love Cadbury dairy milk and love jelly beans and pebbles.

So for that reason I prefer the crunchie bits variety and I really like it. We have bought a big block and it hasn't lasted long in our household even with only three people that can eat it. The blocks are huge too, I think they are bigger than standard cadbury family sized bars and the individual chunks are quite large in size too.

We haven't tried peanut one although that is the one that appeals to me the most, but Casidy is allergic to peanuts so it would have to be one we got when she is not around but I do really want to try it.

The name says it all with this award winning sauce. It's full of honey and sweetness. Not real spicy but your tongue will surely know it's there. This was Rufus's first sauce and it's great for grillin', dippin' or drinkin' straight out of the bottle.